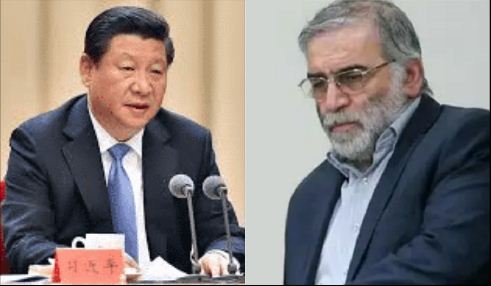 There is a popular saying – ‘killing two birds with one stone’. The latest alleged assassination and death of Iran’s top nuclear scientist Mohsen Fakhrizadeh fits the saying perfectly for the USA. It stalls the accelerating nuclear development of Iran and with the diminishing of Iranian nuclear threat has also dented the prospects of Chinese influence in the Middle East.

China has been aggressively pushing its Belt and Road Initiative (BRI) as a means to increase its influence in the Middle East. Nuclear Technology has been a major bargaining chip when it comes to attracting the Middle Eastern powers for cooperation and as the USA has been putting sanctions on the Iranians, the Chinese became its biggest benefactors economically and strategically. The Chinese assistance package of $400 billion was inclusive of the understanding that China will assist Iran with the development of nuclear technology.

It is not the first time that China would be doing so; it has done the same with North Korea and Pakistan, however, USA and its allies in the Middle East will not get fooled by China a third time, and the added reason is that the Middle East has already been a very volatile region, with the addition of a nuclear Iran, it will be a total chaos. The Chinese had nearly bought their influence in the region by their monstrous financial support to the Iranians.

Read more: Crippled by sanctions, Iran is selling its soul to China and India’s Chabahar Port could be at risk.

However, it is not just Iran, but China has also been helping the Saudis build nuclear energy infrastructure. This may seem very odd if it was some other country, but, we are talking about China. Beijing wants to make sure that whoever remains at the helm of affairs in the Middle East, they remain dependent on them and China remains in the good books of them. This has been the tactic of Beijing all along, to increase its influence in the region. Thus, the Saudis have been utilizing the Chinese foreign policy doctrine in the Middle East to make sure that the US understands that there will be consequences if it tries to take its alliance with Riyadh for granted.

So, while China thinks it is the one calling the shots in its relations with Saudi Arabia in the Middle East, however, the reality is the polar opposite. Thus, the alleged assassination of the top Iranian nuclear scientist by the USA can be called a checkmate for the Chinese designs in the Middle East.

The Iranian path to nuclear technology has been stretched by a lot, and in the meantime, the sanctions, if not removed, will cripple the Iranian economy, as the nuclear project was already a race against time. And with the threat of Iranian nuclear weapons gone, the incentive for Saudis to work with the Chinese has also gone. The Saudis will now be more inclined to work with India and France to see the World Solar Alliance succeed.

Read more: Taiwan and US have come up with a BRI alternative and it is set to dethrone Xi Jinping’s flagship dream

This means that the Chinese game plan to put all eggs in one basket is going to fail taking the route of just financial support and selfish assistance lasts as long as things are going good. As soon as the situation worsens, the first alliances that break are the ones built on just selfish interests and deceit. This idea is turning into a reality in the Middle East and Chinese are the ones whose ambitions and investments will be buried six feet deep.