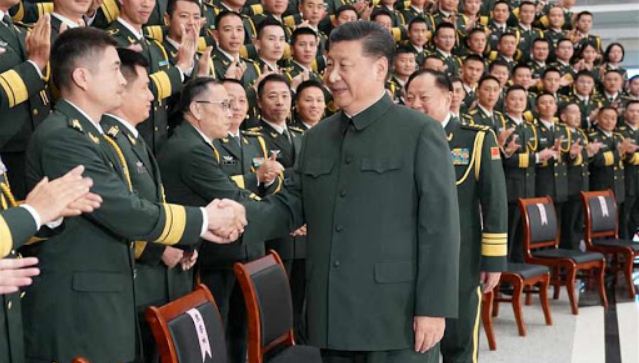 The People’s Liberation Army of China is having to deal with a real time crisis – that of its top commanders not having an ounce of combat experience to account for. The latest conflict which the red rogue country’s untrained military took part in was the 1979 Sino-Vietnamese war, which the PLA lost resoundingly. Interestingly, China claims victory in that war to this very day. Such shamelessness on part of the Chinese military is a subject of discussion at another time. Right now, the PLA having fought its last battle close to 40 years ago, with the same now resulting in a complete absence of mind of the part of the military top leadership in China is the issue at hand.

According to an SCMP report, lack of combat experience and knowledge of modern warfare at the top levels are hampering the Chinese military’s modernisation drive and ability to confront growing security challenges at home and abroad. The Chinese Communist Party, which uses the PLA as a private militia aims at making the military of the country a modernised force by 2027 and a world-class military by 2050. Such plans, however, are simply not moving forward, courtesy the combative illiteracy of the PLA top command. The lack of combative knowledge among the PLA’s top leadership is also resulting in China now resorting to open plagiarism from militaries around the world.

China’s Central Military Commission (CMC), headed by CCP General Secretary Xi Jinping had issued new training guidelines for Chinese forces last month. Hilariously, more than 70 per cent of the document was based on US military guidelines for joint operations. Why? Because China wants to foster integration between the various combat forces and the PLA’s advanced weapon systems, however, that would require knowledge of modern warfare and advanced weapon system handling on the part of the top leadership. Such knowledge is nowhere to be found in China.

Read more: With every passing day, the Chinese PLA is getting buried deeper and deeper in Ladakh snow

Within the CMC itself, a grand total of one military man – General Li Zuocheng, chief of the PLA Joint Staff Department has some combat experience, which too, dates back 40 years to the Chinese receiving a thrashing by Vietnam’s forces. Hong Kong-based military observer Liang Guoliang told SCMP that “many weapons and equipment familiar to the top brass have been eliminated amid the PLA’s modernisation in the past few decades, replaced with new generation weapons.”

The modernisation drive of the PLA, to put it simply, has hit a dead-end. The top leadership, comprising of elders of the Chinese military, have no clue as to how any modern systems are to be operated. Xi Jinping, however, is adamant on the top leadership and senior military commanders taking the reins of modernisation and training rejig in their own hands. This, because the CCP General Secretary realises that China’s fighting force can be salvaged, if at all, only by the senior leadership. The young military commanders, as reported by TFI extensively, are not even qualifiable to be identified as combat-trained soldiers, leave alone individuals who would be able to take the mantle of military modernisation in their hands.

The older guard of the PLA is out of touch with the requirements of modern warfare, and the young cubs of the Chinese military have grown up as “little emperors” with little to no resolve to fight for their country. The report, meanwhile, also stated that the CCP’s overemphasis of political background rather than talent is a big problem for the future modernisation of the PLA. The PLA troops are required to submit to draconian Chinese variants of the Communist ideology. This creates a heavy filter for the country’s force from recruiting those who can actually help save China the embarrassment of losing all its battles. All in all, the PLA’s future is anything but bright.