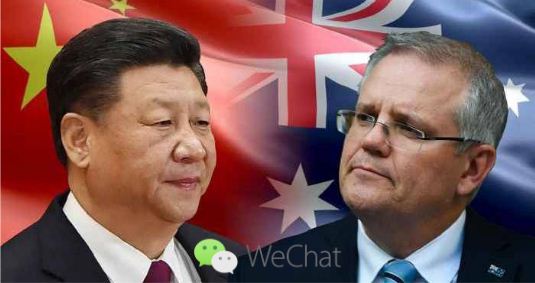 Australian Prime Minister Scott Morrison is showing how to put Chinese government trolls and disinformation campaigners in their place. As the Chinese Foreign Ministry went out of its way to spread disinformation about Australian soldiers, Morrison decided to hit the Chinese Communist Party (CCP) where it hurts the most.

Recently, Zhao Lijian, Chinese Foreign Ministry spokesperson, posted a fabricated image depicting an Australian soldier with a bloody knife next to a child on Twitter. Irked by Beijing’s deplorable move, Canberra first demanded an apology. But when China didn’t budge, Morrison took to WeChat, China’s popular instant messaging platform. He exposed the Chinese government right before the people of China. Now, Beijing is in panic mode and has tried to censor Australia’s PM by blocking his WeChat message.

China has been hardly able to explain why it has censored Scott Morrison’s WeChat message. After all, Australia’s PM wasn’t spreading any disinformation unlike Chinese officials and had only said that Beijing should be “utterly ashamed” for sharing the “repugnant” image.

Meanwhile, Scott Morrison’s hard-hitting message was blocked with a note appearing from the “Weixin Official Accounts Platform Operation Center” claiming that it violated regulations, including distorting historical events and confusing the public.

So, now Beijing wants us to believe that it is Scott Morrison who is distorting facts. Reuters reported that Tencent, WeChat’s parent company, has not responded to a request for comment.

In reality, the Chinese government has given up in face of Scott Morrison’s bid to expose Chinese disinformation campaign before the people of China itself. After all, WeChat is not just a messaging platform, but a super-app for the people of China and Chinese citizens living in other parts of the world, including Australia.

Very often, WeChat is what keeps Chinese expats connected to their families back home in China, as all other tech apps are blocked in China by the ‘Great Firewall’. By exposing Beijing on WeChat, Morrison actually reached out to the people of China. The Tencent-owned app has 690,000 active daily users in Australia. And according to several media reports, Morrison’s message had been read by 57,000 WeChat users by Wednesday.

Xi Jinping’s administration went into panic mood, as it calculated the sheer damage being caused by Scott Morrison’s hard-hitting message. Anyhow, if China thinks that blocking Scott Morrison’s message would undo the harm caused by the entire episode, then it is certainly mistaken. People of China already know how their Foreign Ministry tried to spread disinformation about Australian soldiers, and feed upon the blood of Afghan kids.

The entire episode illustrates how China’s over-hyped propaganda machinery is really a flop strategy. It is one thing to have Global Times or other Chinese State media spread disinformation, but what is the deal with a top Chinese government official spreading fake news on Twitter? When it comes to Beijing, there is no sense of subtlety.

Morrison, on the other hand, knows how to cut Chinese wolf-warriors to size. With one WeChat message, the Australian PM has sent ripples through the entire Chinese government machinery.

India is still to condemn the killing of the Iranian nuclear scientist, the message to the world is clear