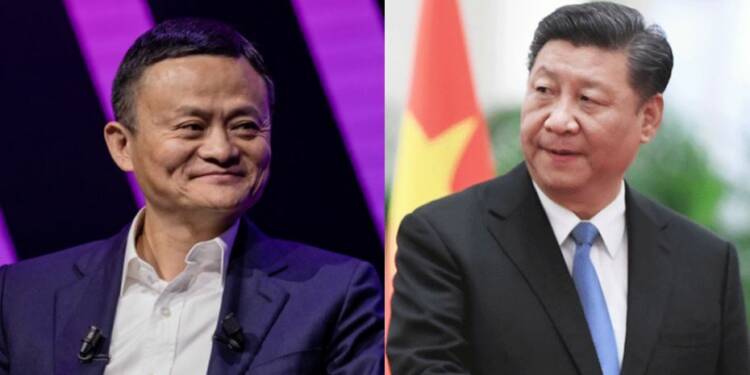 Chinese President Xi Jinping’s parallel war against China’s tech industry led by Alibaba founder Jack Ma, is now assuming the shape of a virtual political struggle between Xi and Jack. In fact, intimidated by Jack Ma’s growing popularity, Xi is now trying to prepare for a possible coup against his brutal and unpopular regime.

December is invariably a very crucial phase in Chinese politics as the Chinese Communist Party (CCP) deliberates its plans for the next year, and quite unsurprisingly, the Chinese President has devoted himself to the cause of battling his country’s tech industry at this juncture. Xi held two big meetings- the first meeting was that of the Politburo, CCP’s decision-making body and the other meeting was a group study session for the 25 Politburo members.

Both the meetings had a connected agenda. The Politburo meeting pushed “strengthened antitrust efforts and the prevention of disorderly expansion of capital.” On the other hand, the study session witnessed the Chinese President stressing the need for “national security,” “political security” and “the security of State power and the political system.”

What if we told you that the two events are to be read conjunctively and not distinctively. Well, Nikkei Asia seems to agree. The Tokyo-based newspaper reported that a source familiar with Chinese politics and economy said that the messages coming from two meetings go hand in hand. The source has been quoted as saying, “Put them together and you will have an accurate understanding of the political meaning.”

Let us explain what is happening in Beijing’s power corridors. The remakes about “strengthened antitrust efforts” are coming from China’s top decision-making body which is rather unusual. After all, issues like antitrust efforts are usually dealt with by market regulators or bodies set up for ensuring free and fair competition.

But China’s Politburo is making these remarks at a time when the Xi Jinping administration has been vindictively launching fishing and roving inquiries into Chinese tech giants like Jack Ma-founded Alibaba. The Chinese government has gone as far as attempting total annihilation of the country’s tech majors, and all this is being done in the name of “antitrust efforts”.

Xi Jinping’s tech wars themselves intensified only after Jack Ma, who is himself a loyal CCP member, made certain remarks that Xi probably perceived as intimidating. At a public event in October, Ma went as far as calling China’s financial regulation outdated and badly suited for upcoming fintech solution companies.

It is possible that Xi interpreted Ma’s remarks as a statement against his administration. This is where the Chinese President’s remarks during a group study session become extremely relevant.

Please note the phraseology that Xi used- “national security”, “political security” and even “the security of State power and the political system.” There is no reference to border security here and therefore, Xi’s remarks certainly aren’t about the military tensions in its entire neighbourhood. His remarks have a more domestic mindset.

What Xi feels is that his political position is getting threatened. Now, Xi isn’t a democratic leader. He is in total control of the CCP without any term limits. No one can replace him. So, his rhetoric has to be about a coup or popular rebellion comes into the picture. And how does it tackle it? “Antitrust efforts” and even more importantly, “prevention of disorderly expansion of capital.”

Xi is actually quite clear in his messaging here. He is hinting how an Alibaba-owned South China Morning Post or a Tencent-owned WeChat are controlling the public narrative in China. Xi Jinping fears that with such powerful media tools, non-CCP entities can control the Chinese public opinion. It won’t be too far-fetched in an autocratic China if Xi Jinping perceives private media platforms as a threat to “national security”.

Also, Xi Jinping seems to envisage a direct personality clash with Ma. After all, Xi is hardly as popular both inside and outside China as the Alibaba founder. During the COVID-19 Pandemic, Jack Ma was donating masks, ventilators and other medical equipment. But Xi was busy terrorising China’s neighbours and bullying other global powers. So, Xi’s history reflects his sentiments about “political security” and “the security of State power”.

Xi Jinping is all-powerful. But he is now looking at a direct threat coming from the tech sector led by Jack Ma, one of China’s richest men. So, the Chinese President is preparing to consolidate his political position in a possibly nasty manner all over again.