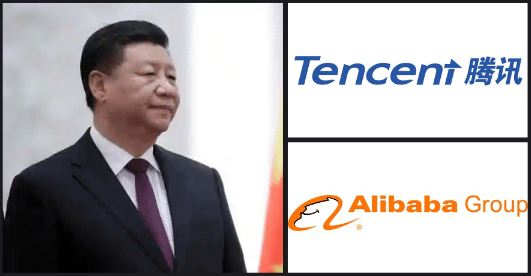 Chinese President Xi Jinping is showing no signs of abating his tech war with China’s internet giants. On Monday, the Chinese government warned internet giants of the Communist nation that it would not tolerate monopolistic practices. Beijing has also asked internet companies to brace for increased scrutiny, while also slapping fines and announcing probes into deals involving two leading tech majors- Alibaba Group and Tencent Holdings.

Xi Jinping is therefore instigating a parallel tech war with his country’s tech sector, following a global backlash against Chinese tech majors. It is no coincidence that the same firms which are facing trouble from governments in democratic countries like India and the United States are also facing regulatory issues in China.

As per Reuters, China’s State Administration of Market Regulation (SAMR) has announced that it would impose a fine of 500,000 yuan ($76,464) each on Tencent-backed China Literature and Shenzhen Hive Box. This is the maximum fine that can be imposed under a 2008 anti-monopoly law in force in China, for not reporting past deals properly to enable anti-trust reviews.

SAMR has also stated that it would look into the merger between game live streaming firms Huya Inc and DouYu International announced in October. Interestingly, Tencent is a major investor in both these firms and had reportedly encouraged the merger.

The market regulation body has also disclosed that will review and investigate other such deals based on tip-offs that some firms have managed to acquire too much operating power in certain sectors. In another veiled threat to tech majors, SAMR has said that the process will be lengthy and a large number of companies would come under the scanner.

In a separate statement, the State regulator also said, “The Internet industry is not outside the oversight of anti-monopoly law.”

Xi Jinping’s investigations into leading tech giants have started showing consequences in the stock market too. Hong Kong-listed shares of Alibaba and Tencent plummeted by 2.6 per cent and 2.9 per cent respectively.

But why is Xi Jinping targeting these internet giants? This is, of course, not even remotely related to concerns about monopolistic practices. The battle against tech giants is actually a prestige issue for the Chinese President.

Xi has started looking at tech giants like Alibaba as a threat to his own authority. The fact remains that China’s geopolitical troubles with the free world have led to dire consequences for its own tech firms. The Trump administration, for instance, announced a ban against Tencent’s WeChat in the US. India too announced a ban on PUBG mobile over Tencent’s involvement. Several Alibaba apps too have been banned by India.

These were some brutal blows being dealt with by India. The growth of private Chinese tech giants is a legacy of former Chinese President Hu Jintao. But when these tech firms started facing trouble outside China, Xi started sensing a rebellion. Alibaba founder Jack Ma, for example, went as far as calling China’s financial regulation outdated and badly suited for upcoming fintech solution companies like Ant Group Co.

Xi Jinping interpreted Jack Ma’s remarks as a challenge to his own administrative authority. The Chinese President probably also felt that other tech giants too would rebel much like Alibaba, after facing backlash in foreign markets.

Now, the Chinese Communist Party (CCP) is trying to bury the culture of huge private tech firms. Xi Jinping believes in absolutism and prefers having full State control over the Chinese economy over independent or private firms who might question the Chinese President and his policies.

‘Yes to Taiwan, No to China,’ Japan-led TPP members’ message to China is loud and clear