To hide its failed policies, China blames its youth for its massive debt crisis 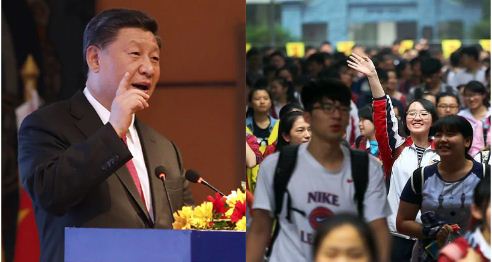 In Xi Jinping’s China, the Chinese Communist Party (CCP) is never responsible for the authoritarian country’s economic woes. Presently, China is passing through a massive debt crisis, and private businesses, both big and small, are floundering due to a severe lack of credit supply in the Chinese economy.

But who is responsible for China’s economic woes? Global Times, a CCP mouthpiece, seems to claim that China’s youth is the one to be blamed. In a short comment published on its website, the CCP mouthpiece has tried to make a strong case against internet loans.

The state-run media house has stated, “as the year end approaches, a group called “debtor alliance” on social media is seeing more and more desperate young debtors swarming in.” It added, “they (China’s youth) are eager to huddle together and find useful advice from each other.”

And then Global Times started blaming the youth for China’s debt crisis rather bluntly. It reported, “According to a 2019 Report on the debt status of young Chinese consumers, 44.5 percent of young people in China are in real debt.”

Finally, there was some moral policing for the Chinese youth on the CCP mouthpiece’s portal. Global Times opined, “Overall, internet loans can be attractive due to its low threshold, quick money inflow and high quota.” The state-owned media house also warned, “They (Chinese youth) should wisely use credit products instead of squandering away future savings.”

So, Global Times has made two things very clear. Firstly, the CCP doesn’t like the new culture of internet loans. Probably, this is why the CCP mouthpiece also said that internet lending can “cause a black hole that absorbs everything one owns.”

Secondly and more importantly, the CCP is also claiming that it is not responsible for China’s debt crisis. In July this year, the Banking and Insurance Regulatory Commission, China’s apex authority for regulation of banking and insurance sector, had warned the government to prepare for a ‘big rise’ in bad loans.

In fact, China’s bad debt trouble isn’t of recent origin. Over the past few years, the non-performing assets (or NPAs) of China’s local banks have grown exponentially. The NPAs were triggered after an artificial real estate boom went bust and several companies defaulted on loans.

The situation in China is so bad that last year, the Central government was compelled to take control of local lenders in many provinces and sustain their operations. Beijing took over Baoshang Bank, a big lender in Inner Mongolia, and also bailed out Bank of Jinzhou and Hengfeng Bank.

The worst-hit are China’s small businesses. Xi Jinping has been running a campaign to reduce financial risk in the Chinese economy, which has already made it extremely difficult for small Chinese firms to secure loans. And then the miserable state that China’s state-run regional banks are in, has led to a sharp decline in credit supply to small businesses in the Communist nation.

Xi cannot control China’s debt crisis, nor can he ensure adequate credit supply to reinvigorate Chinese businesses. But Global Times believes that it is China’s youth which is to be blamed for the authoritarian nation’s economic woes.

After RCEP flop, China sees joining TPP as the last opportunity to save its fortunes but Japan will not allow it