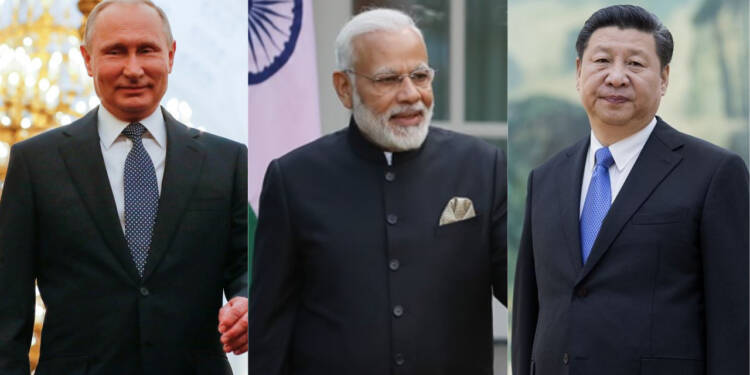 China does not want to compete with India when it comes to bilateral relations with Russia. Xi Jinping and his mouthpiece publication Global Times has once again churned out a haphazard article that shows nothing but the helplessness of Beijing in being designated as an afterthought in the pecking order of Russia’s strategic partners in the region.

In the report, Global Times tried to deliver its pitch to Kremlin by remarking that Putin need not choose between India or Russia rather, he could take both together and work toward similar goals.

“Decision-makers in Moscow should not regard China and India as two parallel foreign policy priorities that Russia has to choose between and/or keep separate from each other. They should rather approach Beijing and New Delhi as partners, which will become more valuable for Russia if they find ways to work more actively with each other.” read the article.

China understands that the momentary frost between India and Russia regarding contentious issues such as QUAD, Afghanistan, and BRI could be overcome by a single meeting between the representatives of the two countries. Thus, it is trying to fake-plant a scenario where China is equivalent to India when it comes to relations with Russia.

To sow the seeds of doubts, China instantly activated its lobby in India to portray that the relations between Moscow and New Delhi had come to a screeching halt after the annual summit was postponed for the first time in 20 years.

Russia is a very important friend of India.

Damaging our traditional relationships is short-sighted and dangerous for our future. pic.twitter.com/U5VyFWeS6L

Publications like The Print in India carried the story where it was remarked that the two allies had fallen out on the issue of QUAD and thus the meeting was shelved. However, the baseless claims were instantly refuted by India’s MEA, as well as, the Russian Ambassador to India, Nikolay Kudashev.

Please see our response to a media report regarding the India-Russia Annual Summit. pic.twitter.com/BShPqq8NTR

Noted the article “India-Russia annual summit postponed for 1st time in two decades amid Moscow’s unease with Quad” in the Print.

Find it to be far from reality. Special and privileged strategic partnership between Russia and India is progressing well despite the #COVID19.

“The India-Russia Annual Summit did not take place in 2020 because of the Covid Pandemic. This was a mutually agreed decision between the two Governments. Any imputation otherwise is false and misleading. Spreading false stories on important relationships is particularly irresponsible,” said Anurag Srivastava, MEA spokesperson.

Global Times even tried to eye the resource-rich Far East region of Russia and Arctic by firing the gun from India’s shoulder. In an attempt to sugarcoat reality, Beijing gave a highly impractical solution in the manuscript it published through its mouthpiece. However, in doing so, China showed its true colours.

“Moscow could offer India and Beijing new opportunities for trilateral development projects in the Arctic region, in Central Asia or even in the Russian Far East. Agriculture and food processing might represent another area for trilateral cooperation. The three countries could consider working together in pharma and health sector, where they also complement each other,” read the article.

Read more: Not stopping at Russia’s Vladivostok, China is eyeing a piece of Alaska in the Arctic

China’s ultimate goal is not maintaining bilateral or trilateral arrangements amongst the three stakeholders. All that the Politburo of Beijing wants is to exert its dominance in the region by building on its neo-colonial expansionist policies. Capturing the Far East and the Arctic is a case in point.

The dialogue of emphasizing multilateralism is merely a façade by Beijing and despite the blabber of Global Times, the reality is diametrically opposite which the officials of Moscow and New Delhi fully understand.