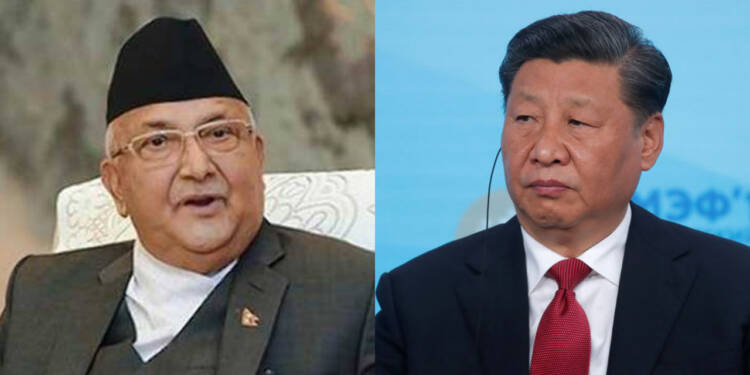 The Chinese leadership are in a pickle, as they have invested a lot of resources to gain influence in Nepal and with the creation of a united communist front, China thought it has permanently established a very effective tool to establish effective influence in the Himalayan country. However, with the Nepal PM KP Sharma Oli recommending the dissolution of parliament and the President Bidya Devi Bhandari signing on the same, all the efforts of China on creating a solid block of influence in the region has been negated.

Read more: China sent its Defence Minister to Nepal and Bangladesh to mend ties, but his tour turned out to be a massive humiliation.

According to the Hindustan Times report, on Sunday evening, PM Oli met parliamentary officials from China, led by Guo Yezhu, vice-minister of the international department, a prominent CCP member of Xi Jinping’s team. The exact details of what exactly happened during the two-hour conversation have not been made public. But if Nepalese sources are to be believed, then China will have to return empty-handed this time as PM KP Sharma Oli has not budged.

But what has happened, due to which PM Oli is adamant on his decision to dissolve Parliament, and is not ready to listen even to China? Let us look at the reasons which can be leading to these events.

The first reason may be that PM Oli wants to end internal strife by holding elections in the middle of the session where the opposition and the opposition faction is caught off-guard and he may ride to victory on the nationalist and anti-Chinese interference emotions.

The second reason may be that PM Oli is fed up with the increasingly frequent interference of China, and now he wants to get rid of the clutches of China by siding with India.

A third reason could also be that these days there are huge protests against the current regime in Nepal, in which there have been demands for the restoration of the Hindu monarchy of Nepal and as PM Oli may have got the mood of his nation, thus, he wants to side with this nationalistic right while using the Prachanda’s Communist Party of Nepal (Maoist) faction as the scapegoat.

If anyone still feels that China can take Nepal under its control, it’s just wishful thinking. Prime Minister KP Sharma Oli seems to have learned such a lesson that he will no longer be in the limelight of China by capturing Nepali territory and firing tear gas shells.

Recently, when KP Sharma Oli decided to dissolve the Nepalese Parliament, a delegation from China came to persuade him, but Oli apparently refused to listen to them. Although not much was known about this meeting, media reports believed that Oli was clearly speaking to China – you have no business here.

This is why PM Oli has now stopped entertaining China as well as taking an aggressive stance. The Hindustan Times report further stated, “Experts in Nepal believe that the CCP’s attitude during the meeting was clear – PM Oli’s government should withdraw its decision, and in return, they will have special support from the CCP to crush the opposition and thus, complete their five-year term.”

But PM Oli also stood firm on his decision that only the Supreme Court will decide the future of Nepal, and not any other country will be given the powers to dictate Nepal’s sovereign issues. So far, more than 12 petitions have been filed against the present decision of the Nepal administration, which will be considered by a five-member bench. Also, just a few days ago when Chinese Ambassador Hou Yanqi met PM Oli, he replied bluntly that he would not take any action against the decision of his cabinet. And in turn, PM Oli has found an ally in its longest friend India, which has clearly stated that the things conspiring in Nepal are internal matters of the Himalayan nation and India will not like to comment on it.

Read more: India snatches Nepal back from China’s grip in just one month.

Frankly, PM Oli made it clear from his stand that he was no longer the same Oli, who would have agreed to confront India at the behest of China. The way PM KP Sharma Oli is adamant on his decision, he not only wants to improve his image in the public but also wants to give a strong message to China – if you respect the law of the land, then everyone will benefit.

Like a jilted lover, China has gone out of its way to woo Japan but Japan’s response to it is just savage