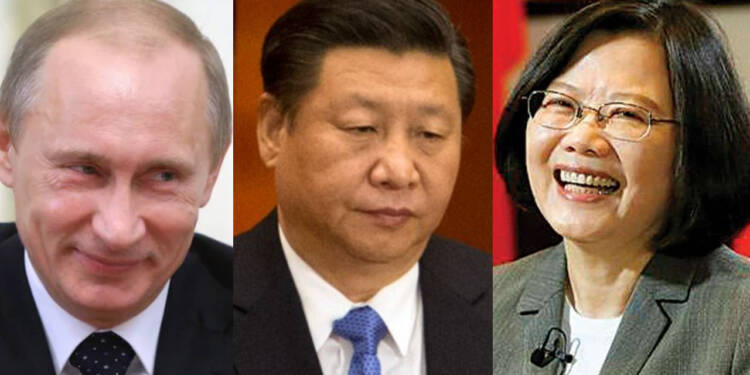 In what could be a major reason for a diplomatic spat between the two “strategic partners”, Russia has included Taiwan in its list of foreign countries ‘eligible’ for its unified e-visa program. While Russia and China share a tangible and cordial ‘partnership’, the move to include Taiwan in a list of foreign ‘countries’ is going to irk Xi Jinping and is just another display of his failure to handle bilateral relations even with his most trusted partner.

China has always claimed Taiwan to be a part of its territory. It dislikes any external recognition over Taiwan and has always pressed for a “one China policy”. Taiwan has emerged brightly through the pandemic and has become the focus of the world for its measures to control the coronavirus. But China has been demonised for its failure to do so, fudging the data and delaying the measures that would have actually controlled the pandemic.

Moreover, Taiwan’s newfound fame in the global order has also meant that there is increased pressure and scrutiny on Chinese aggression across the Taiwan Strait. Thus, Putin’s decision to include Taiwan in a list of countries is certainly going to raise some eyebrows around the globe and send alarm bells ringing of a possible diplomatic meltdown between the two strategic partners.

An official of the Minister for Foreign Affairs (MOFA) announced Tuesday that Taiwanese nationals may apply for a short-term single entry visa to Russia through their recent electronic visa issuance program.

Yang Syin-Yi, Director of MOFA’s Department of West Asian and African Affairs said at a regular press briefing that Russia has included Taiwan in a list of foreign countries eligible for its unified e-visa program.

Read More: Maybe the world hasn’t noticed it yet but Russia has blocked China’s all three entrances to the rest of the world

Yang added ‘The new e-visa program was first announced in Taiwan by the Moscow-Taipei Coordination Commission on Economic and Cultural Cooperation (MTC) in October 2020, and people can contact the MTC for details on the program’s launch date and application requirements.

Moreover, she pointed to the details of the program, including “Once the program begins, tourists and business people can apply for a Russian unified e-visa online for US$40, except for children under six years, who can get the visas free of charge. The e-visas will be valid for 60 days, with their holders allowed to stay for up to 16 days in Russia.

Yang said that Taiwan has been providing the Russians visa-free entry privileges since September 2018 and the privileges have been renewed twice because of the positive effect on Russian tourist arrivals.

An unprecedented rate of increase of tourists from Russia to Taiwan and now Russia’s decision to include Taiwan in its unified visa program is a sign of warming relations.

While China does press “one country two systems” with Taiwan, its latest crackdown on Hong Kong’s democratic structure is surely a wake-up call to the later and the United States has an ambiguous clause to help Taiwan if an armed assault is carried out by China across the strait.

With nearly 380 instances of cross-border infringements and aggression recorded last year, Taiwan needs friends that can pull a major counterweight to thwart Chinese plans and Russia would be the perfect partner.