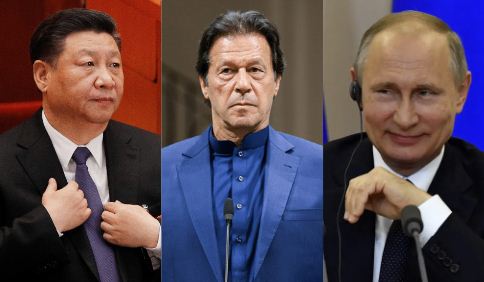 China’s troubles in Pakistan simply keep inflating. Beijing wants to make a colony out of Pakistan, and Islamabad doesn’t seem offended either. But Chinese investments, including the China Pakistan Economic Corridor (CPEC) is facing trouble from pro-independence outfits in Pakistani-administered Sindh and Balochistan. Chinese interests in Pakistan are getting attacked, and now Beijing has a new competitor in the Islamic Republic- Russia.

As per Bloomberg, Pakistan will start building a 1,100 kilometre (684 miles) long pipeline with Russia in July. The pipeline project will help the Islamist nation to operate more liquefied natural gas or LNG terminals. The project will involve two Pakistani gas distribution companies- Sui Southern Gas Co. and Sui Northern Gas Pipelines Ltd., whereas construction will be led by a Russian consortium. Pakistani companies have already started acquiring land for the project.

Pakistan is a top emerging LNG market. It has to import the super-chilled fuel because domestic production has maxed out without any possibility of further growth. This is why Pak needs LNG terminals to meet its consumption levels.

On the other hand, Russia is itself becoming almost a two-sector economy. It needs more markets in the oil and gas sector. While Moscow remains a huge defence exporter, the Putin administration has been trying to make Russia a major oil and gas power. And therefore, the Kremlin decided to steal Pakistan from China.

The Russian investments in the Islamic country matter, because it reduces Beijing’s much-cherished influence in Islamabad. Pakistan’s fragile economy and weak political leadership have been kneeling before China over the recent past. China and Pakistan were once seen as all-weather allies. But today, China wants to play Pakistan’s godfather and simply buy out the Islamic Republic.

Pakistan remains important for China, because of its geographical location. The paper dragon wants to operate the Gwadar port and bypass the India-dominated chokepoint- Strait of Malacca, which falls in between Chinese trade routes.

Besides, China will never mind having a colony next door and using it as a proxy state for geopolitical goals. Chinese strategists, for example, keep talking about a two-front strategy against New Delhi with Pakistan in India’s West and China in its North and East. Also, China finds it convenient to interact with non-state actors in Afghanistan through Pakistani channels.

However, the Baloch-Sindhi alliance in Pakistan is jeopardising CPEC investments and attacking Chinese interests in the Islamic Republic. While Islamabad is ready to compromise itself with Chinese business interests, Balochs and Sindhis aren’t ready to let China occupy their land. Pakistan Army remains incapable of protecting Chinese interests.

China has been growing susceptible of the investments climate in Pakistan. Recently, Beijing even asked for additional guarantees before sanctioning $6 billion loans for a CPEC rail project.

China is simply losing the capability to invest in Pakistan, because of Islamabad’s domestic issues. And this is exactly when the Russian President Vladimir Putin decided to start investing in the Islamic country. As China gets kicked out by pro-freedom groups in Pakistan-administered Sindh and Balochistan, it seems that Moscow would start eating up China’s pie in the Islamic Republic.