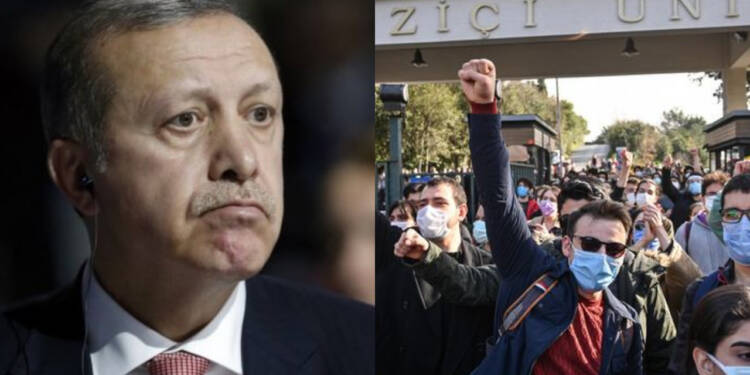 Erdogan has been dovetailing his country into the worst economic disaster and from the looks of it, the country’s youth has had enough of this wannabe caliph. Youths from Turkey have been at arms with the Erdogan government and are leading a protesting against their President. Hundreds of university students have been protesting in Istanbul for three days, as per WION News reports. Because last large protest in 2017 was stopped with an iron fist, with many of the protestors notwithstanding their position and stature are still behind bars in Ankara’s jails.

Read More: Children in Turkey are made to face trial for allegedly insulting Erdogan

Earlier Erdogan had been leading the support for many insurgent groups in other countries and was thus, destabilizing multiple regions. Be it, Libya, Syria, Eastern Mediterranian or Nagorno-Karabakh among others, but this time, the trouble has come knocking on the doors of Erdogan’s shaky castle from within its castle and that too from the students. With the whole world now turned into Ankara’s enemy and not even the traditional allies by its side, Turkey is left alone and vulnerable with the economy sliding aggressively downwards and the country turning more and more extremist.

From the looks of it, the Turkish students and youths have taken the baton to reclaim the Turkey of Ataturk back from the clutches of the Islamist Erdogan. These protests have continued for over 72 hours. The Turkish police tried to crack down but it only made the situation worse. The students with the support of their professors have refused to cede ground.

As the economic situation has been deteriorating and the country is facing increased inflation and decreased per-capita capacity to even buy necessary items, Erdogan has increased his efforts to gain control of all the institutions where any form of dissent can be garnered. And the same thing was happening at Bogazici University in Istanbul. It is the most prestigious university in Turkey with a long-standing reputation for tolerance and intellectual independence.

The university was established as Robert College in 1863. To this day it follows the American higher education system. Erdogan sees this university as a threat. And that’s why he appointed Melih Bulu as the university’s new rector. He is a longtime Erdogan loyalist. He even contested elections on the party ticket.

Read more: Turkey is set to become another Venezuela as 25% of its people cannot even buy food.

He was appointed by a presidential decree issued by Erdogan on January 1. This has sent the whole university into a mode of panic, as they can very clearly see this as an attempt for Mr Erdogan to stifle any form of dissent. “As you know, for a long time now, the AKP has increasingly consolidated its hold on the universities. The easiest way to do this is by appointing rectors. This has happened in many universities across our country, today is Bogazici University’s turn, but the students of Bogazici have come out to speak against this today,” said Cihan Cicek, a student from Istanbul University.

With the protests becoming more and more intense, and the Erdogan led conservatives already facing trouble due to the opposition gaining popularity, this could very well be the beginning of the end of the Erdogan’s rule, which will bring an end to the worst days of Turkey.

Now, Chinese PLA soldiers can self destruct to ‘save their dignity’. The catch is that their PLA superiors will hold the controls