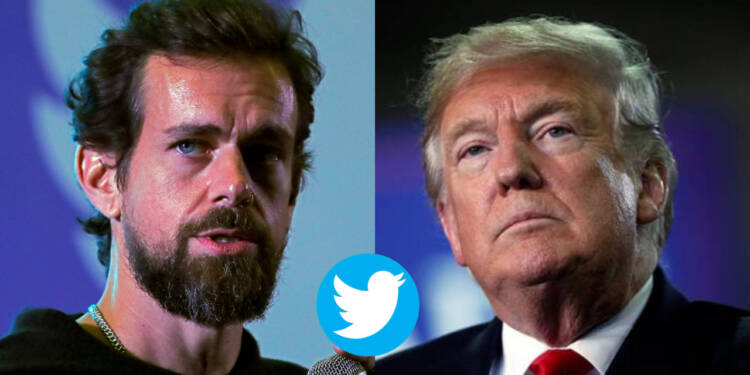 “Pack your bag fellas, we are going on a trip – a guilt trip” — Jack Dorsey, the Co-founder of Twitter woke up on Wednesday and tried to legitimise his actions of banning the Twitter handle of American President Donald Trump by writing a feature-length mumble-jumble thread where he constantly tried to evoke emotions of righteousness and consciousness to stomp over the fact that he had disparaged the FoE of a state head, supposedly the most powerful person in the world.

Defending the decision, Jack wrote, “I do not celebrate or feel pride in our having to ban @realDonaldTrump from Twitter, or how we got here. After a clear warning, we’d take this action, we made a decision with the best information we had based on threats to physical safety both on and off Twitter. Was this correct?”

I do not celebrate or feel pride in our having to ban @realDonaldTrump from Twitter, or how we got here. After a clear warning we’d take this action, we made a decision with the best information we had based on threats to physical safety both on and off Twitter. Was this correct?

Dorsey’s charade comes at a time when the pressure is mounting on him and his company from all quarters. Firstly, Twitter saw its market value plunge over 6.4 per cent at the start of the week which dipped another 2.4 per cent as the sell-off continued into Tuesday’s close. The declines saw Twitter’s market cap drop by $3.5 billion.

It is not a coincidence that Facebook and Twitter, the two largest social media platforms, saw their $51.2 billion in combined market value erased over the last two trading sessions. The market is miffed by the suicidal actions of the social media giants which have set a dangerous precedent for the future.

Big Techs have taken up the mantle to create a nanny state where they are the judge, jury, and the executioners. And a free capitalistic stock market dreads nothing more than a private player trying to rule with impunity.

Twitter put out a passionate statement where ironically it put itself in a paradox by saying, “We strongly condemn internet shutdowns – they are hugely harmful, violate basic human rights and the principles of the #OpenInternet.”

Ahead of the Ugandan election, we're hearing reports that Internet service providers are being ordered to block social media and messaging apps.

We strongly condemn internet shutdowns – they are hugely harmful, violate basic human rights and the principles of the #OpenInternet.

Jack Dorsey and his coterie of Vulcan level intellectuals should understand that shutting down access to Twitter’s vicious bias is not shutting down the Internet. And even if it was, Twitter is not the global protector of Democracy.

Uganda has effectively become one of the very first countries to come cracking down hard on American big tech social media companies for their blatant bias not just in the United States, but across the world.

Also reported by TFI, an Internet Service Provider Company named ‘Your T1 WIFI’ – based in Idaho, USA banned Facebook and Twitter from its services after the social media platforms unilaterally banned the accounts of American President Donald Trump.

Furthermore, Trump has received support from world leaders around the globe, even when he is set to leave the White House, come January 20. German Chancellor Angela Merkel has reservations about the way Donald Trump’s Twitter account was suspended, her spokesman said, adding that legislators, not private companies, should decide on any necessary curbs to free expression.

In addition to Angela Merkel, UK Prime Minister Boris Johnson’s spokesman said private social media companies make their own moderation decisions, but they should be accountable.

With all the aforementioned incidents putting additional Pressure on Twitter, the company seems to be crumbling. Just because the likes of Twitter and Facebook are private entities, it doesn’t mean they have the ‘get-out-of-the-jail-free-card’ which stops them from being held accountable.

Social media giants have openly admitted they are not neutral and that the platforms have an inherent left-wing bias. If the platform was not partisan, it could have been plausible to believe in Dorsey’s euphemism-laden gibberish for a second, but we do not live in an ideal world and that is not the case as well.

Reported by TFI, Jack Dorsey has openly admitted on the record that conservatives fear to voice their opinion within Twitter itself as the left-wing employees outnumber them and further dominate them.

Since the incidents at Capitol Hill last week, the ‘Silicon Sinister Six’ have come out with their holier than thou attitude where they proclaim themselves as some righteous platforms that believe in the good of the world.

However, the truth is that these platforms openly fleeced the popularity and ability of Trump to churn a controversy to their benefit. And when Trump ceased to serve any purpose, platforms like Twitter dumped him like a sack of potatoes.

However, the heat has started reaching the Twitter headquarters and one can expect the top brass of Twitter to come up with more such explanations with increased frequency. After all, hog washing history and opposition’s purview through the use of ‘forced rewritten narrative’ is a trait deeply embedded in the left-leaning cabal. Isn’t it?