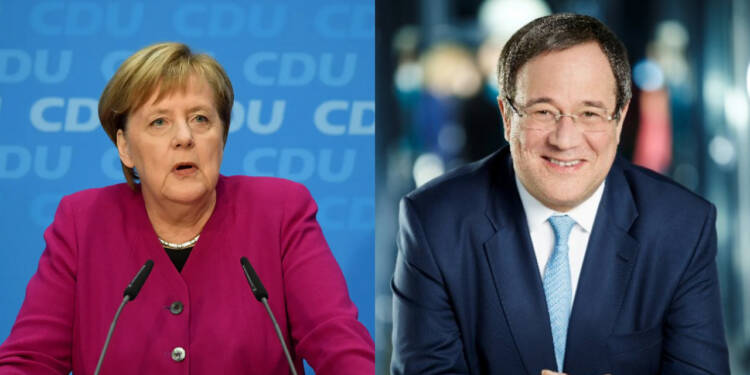 As Chancellor Angela Merkel steps down later this year, few foresee a change in Germany’s attitude toward China. Germany would not even question China under Armin Laschet’s leadership, who won the party elections over Friedrich Merz, Merkel’s biggest rival.

Germany has for years under Merkel, propagated China’s economic partnership with the EU and finally succeeded when EU and China signed a massive investment deal in what would be Merkel’s last contribution in her final year of office. But as she’s leaving, she has made sure that Germany’s stance on China remains the same and it remains a lapdog on a tight Chinese leash.

On Saturday, Germany’s ruling party voted for continuity by nominating Armin Laschet as the leader, voting politically and in style for the candidate who most resembles the outgoing chancellor, Angela Merkel.

A relatively close Merkel ally, Laschet received 521 votes in a run-up against Merkel-rival Friedrich Merz, who received 466 votes in a digital meeting. After Norbert Roettgen, chairman of the foreign affairs committee in the Bundestag, was eliminated in the first round of voting at the Christian Democratic Union’s online conference, Laschet, president of the country’s most populous province, defeated long-time Merkel critic Friedrich Merz in a runoff.

Laschet said, “I’m aware of the responsibility that comes with this job and will do everything to do well in the upcoming regional elections and to ensure in the national election that the next chancellor comes from the Union.”

Laschet is Merkel’s biggest supporter and will most likely retain her centralism, avoiding the problems of the right-wing and the Greens, and firmly committed to the EU, of the three candidates.

Ahead of the vote, Laschet had said to the delegates “The Germany I imagine is a European Germany; we need to be able to integrate, to hold a society together.”

Carsten Brzeski, global head of macro research at ING said “The CDU delegates have clearly voted for a continuation of Merkel´s line, staying in the political centre,” he added, “Laschet has proven to be very pragmatic and stands for more fiscal stimulus and support for the green transition without losing the interests of business.”

When Merkel steps down later this year, a few expect it to change, which may complicate Joe Biden’s attempt to create a large front against China. And now with a long time Merkel centrist at the helm of the CDU- and probably the next Chancellor- things very likely would remain the same.

Germany is holding a national election in September that will mark the end of Ms Merkel’s last term, and Laschet would piggyback on his predecessor’s success at the top and could become the next German chancellor. People close to Laschet say that his views are very similar to those of Merkel’s in regards to engagement with China and the European Union. The country’s broadly friendly posture toward China, and to a lesser extent Russia, will persist regardless.

Read More: Has Angela Merkel received kickbacks from China to get the Sino-European investment deal done?

A top CDU official noted before the party elections, “We remain much closer to the United States. Yet we will not decouple from China, we are too multilateral for that…We are an export nation and in that sense, it’s important for us to keep all channels open.”

President-elect Joe Biden has sent signals that the U.S. will remain tough on China, from trade to technology but to what extent remains unknown until Biden officially takes office on the 20th. But on the other hand, Merkel has followed a widening strategy towards China resulting in the investment agreement last month, details of which have not shared with smaller EU Member States. Germany refused to ban Chinese Huawei Technologies Co. from its 5G mobile network virtually remaining the sole power among major Western countries to not do so, despite rave national security threats.

The EU has sought stronger economic relations with Beijing, as the Trump administration challenged China while still trying to increase American access to its giant market. While Biden’s incoming administration has suggested that it aims to re-establish Europe ties, several officers at Ms Merkel’s CDU reported that US and German interests are still diverging with China.

According to Reinhard Bütikofer, an expert on China and a member of the European Parliament for the German Greens, the EU-China agreement, clinched in the final days of Germany’s six-month bloc presidency and just weeks before Mr Biden takes office on Jan. 20, provides a glimpse of how the strategy will proceed after Ms Merkel’s departure.

People close to the talks said that Beijing had given last-minute market access concessions to European companies that would favour German industries to a large extent. The team of Ms Merkel then forged a shared position with France, which in some Chinese cities was promised access to health care procurement, these individuals said.

In line with Ms Merkel’s comments in 2018, the long-sought settlement was that Europe could no longer rely on its alliance for stability and prosperity only with the U.S. alone.

But Mr Bütikofer rightly pointed out that Ms Merkel’s focus on bilateral agreements with geopolitical rivals was still misguided.

“She underestimates how much our interests converge, even with an America that is no longer observing all of its multilateral commitments,” he said.

And now with Merkel’s staunch supporter Laschet at the helm of the CDU, and him becoming the German Chancellor after the elections, the state’s misguided policy on a geopolitical rival, and a threat to international and Germany’s national security would be disastrous.