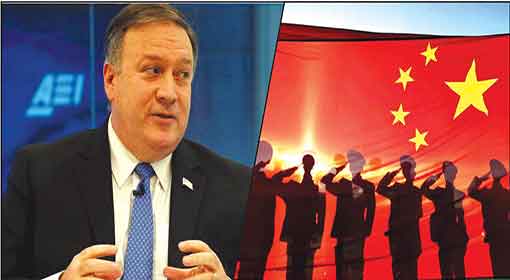 These last four years were really harsh for the Chinese, as they were not able to trick the US administration under Donald Trump as they did during the previous regimes. And the greatest misery was inflicted on the Chinese Communist Party by the Secretary of State Mike Pompeo, who kept up the aggression and did not relent. Now, with only days left before members of the Trump administration leave office, the Chinese Communist Party mouthpiece Global Times’ rants on Mike Pompeo indicates how scared the CCP is, and their cabal is on the possibility of a future Pompeo presidency.

The best compliments from an enemy are his angry rants and worst possible description of yourself. If your enemy does not badmouth you, then it means either you were not able to inflict large wounds or they do not consider you capable. However, after TFI published an article, propounding the idea that, with the Biden administration getting ready to take over the office, Secretary of State Mike Pompeo’s legacy is what would make him the best bet to lead the USA and the Republican Party. Beijing has already created the best case for Pompeo to become the next President as the CCP’s mouthpiece, Global Times has gone berserk and has been relentlessly criticizing Mike Pompeo.

In an editorial, solely directed towards Mike Pompeo, Global Times mentioned that, “It is obvious that Pompeo did so out of the interests of the Republican Party and his own. Analysts believe he has ambitions to run for the presidency in 2024.” In another article the publication suggested the incoming Biden administration to “dial down the rhetoric. The past four years have witnessed a “rhetorical war” in China-US diplomatic relations.

The US State Department, and in particular its Secretary Mike Pompeo, has engaged in systematic rhetorical attacks on China and its Communist government. It added that this was never seen before in China-US relations since these two countries established diplomatic relations in 1979. without specifying any reason, it further added that China was a saint through these years and it was the USA under Trump and Pompeo who were the “lunatics”.

Not only Chinese media but the Foreign Ministry had some words for the Secretary of State. Chinese Foreign Ministry Spokesperson Hua Chunying on Monday called the US Secretary of State Mike Pompeo- “Mr Liar,” while snubbing the claims made in a US Department of State document that suggests the novel coronavirus emerged from a Chinese lab and had a military background.

“The statement and the list are full of conspiracies and lies, which are consistent with certain US officials who have dealt with the pandemic in a passive way and constantly shifted the blame to others. The list is another US-made list of lies,” Hua told a press conference on Monday.

Pompeo has frequently been spoken as a potential Republican presidential candidate after Donald Trump, and it is because if his sheer clarity of American interests, as well as, his farsightedness. Even before leaving the office, Mike Pompeo had been true to his duty by imposing sanctions on China, Iran and Cuba to give a last-minute further push to the American interests and deny these countries even a week to succeed in creating hurdles for the USA.

Since Mike Pompeo took the office as Secretary of State, he has entirely flipped this dynamic and which is why the allies have regained confidence in the alliance system with the USA. In one of his tweets, just before leaving office, this idea comes out clearly. The tweet went, “Good diplomacy means setting clear expectations of friends and enemies alike. All we’re asking is for Iran to behave like a normal nation.”

Mike Pompeo has been the biggest challenge for the worst enemies of the USA in the 21st century, and the biggest nightmare for the Chinese Communist Party. Pompeo along with the Donald Trump has been continuously charging a blistering attack on the Chinese with the coupled force of sanctions and alliances. And with the latest examples of China being scared to even the idea of Mike Pompeo becoming the next President, is an obvious declaration that China considers that he could be the next President of United States of America.