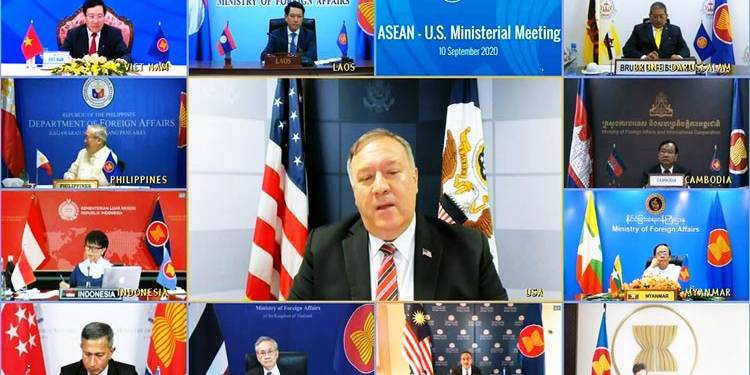 U.S. Secretary of State Mike Pompeo on Thursday at an annual conference with the Association of Southeast Asian Nations (ASEAN) asked his counterparts to go beyond words and act against China’s bullying in the disputed South China Sea, promising America will back them up.

“I think keep going, don’t just speak up but act, don’t let the Chinese Communist Party walk over us and our people. You should have confidence and the American will be here in friendship to help you,” said Mike Pompeo.

China does not respect democratic values and principles of sovereignty, quality, and territorial integrity enshrined in the ASEAN charter, Mr. Pompeo said. He cited the U.S. blacklisting of Chinese companies for their roles in constructing islands in the disputed waters that infringe on other states’ claims.

Beijing’s belligerence in the South China Sea has been well documented where it claims to have territory over the entirety of the region. It conducts illegal military exercises, builds artificial islands, attacks the sovereign boundaries, and sends its PLA-Navy masquerading as fishing boats to encroach new shores.

However, the ‘Tiger economies’ of ASEAN talk against China behind closed doors to the QUAD but are virtually servile before the Middle Kingdom when it comes to confronting it in the face.

So far, the ASEAN countries have been the biggest beneficiaries of the exit of companies from China as the majority of such companies are setting their manufacturing units in these countries. Vietnam got the largest share of the pie, followed by Thailand, Cambodia, and Myanmar.

The Quad—comprising of India, Australia, the US, and Japan is going out on a limb to protect the maritime rights of these small nations. The least these nations can do is put together a united front and openly support the Quad. Vietnam should look no further than Taiwan to learn that even smaller countries can rile up the paper-dragon.

As reported by TFI, Vietnam’s ambassador to India, Pham Sanh Chau had met Indian foreign secretary Harsh Shringla in August and briefed him about Chinese transgression in the South China Sea near the Woody Islands and simultaneously asked New Delhi to explore the region for oil and gas blocks.

While Vietnam coming to India for protection is indeed a welcome and laudable step but Hanoi also needs to apprehend that at the topmost echelons of world-diplomacy, a country that is under some threat from a non-state actor needs to be bold and assertive to its enemies.

China is literally and figuratively encroaching upon the border of countries like Vietnam in the South China Sea. With skin in the game, the Quad is well within its rights to ask the ASEAN nations to shed its garb of frailty and come out swinging. The message of Pompeo is clear to ASEAN–pull up your socks, show some heart and you will have the unflinching backing of the new world order.

After Japan, Russia is all set to sign a Logistics Pact with India and now the encirclement of China is complete