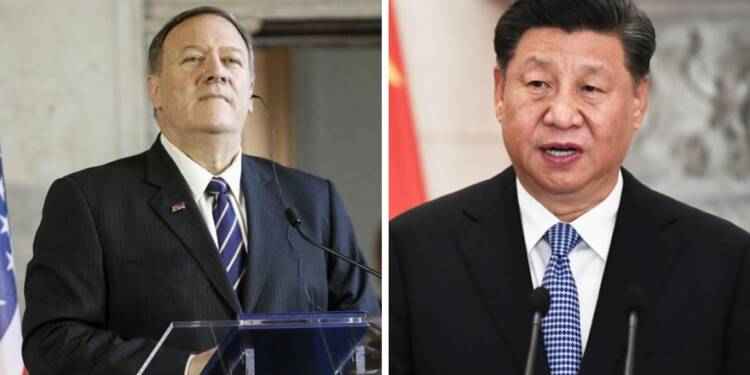 China has made way too many enemies over the past few years, but if you have to choose the men whom China hates the most, you don’t have to think too much. It has to be former US President Donald Trump and his aide, the then Secretary of State Mike Pompeo. Trump and Pompeo were the ones who ensured that China was questioned and criticised for creating the Covid-19 Pandemic and putting mankind in harm’s way.

Today, Trump and Pompeo are no longer in power. But the Chinese Communist Party (CCP) continues to fear them. Presently, China is itself getting ravaged by the Delta variant of the Covid-19 virus. More than a million Chinese citizens had to be put under a strict lockdown. The latest wave of Coronavirus cases in China is bound to instigate disillusionment towards the CCP, and a nervous CCP is now trying to shift blame by running anti-Trump, Pompeo propaganda.

The CCP continues to get haunted by Pompeo, for he was the one who attacked the Communist Party during his visits around the world and also delegitimised it by repeatedly referring to Xi Jinping as the CCP General Secretary instead of calling him the Chinese President. This was a part of his strategy to play up Xi Jinping’s image as an authoritarian dictator.

Jennifer Zeng, a commentator on Chinese politics who once worked as a researcher at the Development Research Center of the State Council of the People’s Republic of China, has revealed how pro-CCP media is running a negative propaganda against Mike Pompeo.

She tweeted, “Dear @POTUS @JoeBiden, a “leaked” secret speech of @mikepompeo is circulated by CCP media, saying that Pompeo admitted that COVID19 & SARS are bioweapon develop by US. The release of COVID is an accident, but it helped US.” She also shared an archived article, written in the Chinese language that allegedly ran anti-Pompeo propaganda.

Dear @POTUS @JoeBiden, a "leaked" secret speech of @mikepompeo is circulated by #CCP media, saying that Pompeo admitted that #COVID19 & #SARS are #bioweapon develop by #US. The release of #COVID is an accident, but it helped #US.
Archived article at https://t.co/pZM8mMDzXE pic.twitter.com/zQAKgVhAYb

She added, “Don’t underestimate CCP’s ability to “muddy the waters” to avoid responsibility. 5 M Chinese have signed a petition calling for an investigation on the US’s role in leaking COVID.”

Zeng also shared a screenshot, allegedly circulated by the pro-CCP, misquoting Pompeo as asking fellow Americans to “rob the world”. The screenshot also seems to suggest that Pompeo is talking about how the mission has changed with “advancement of technology.” The screenshot too is written in Chinese and it also suggests that pro-CCP media falsely quoted Pompeo as saying, “Now that the third world war has started, more leaks will take place!”

The archived article shared by Zeng too sounds just like another piece of CCP propaganda. It claims to carry details from a “leaked document from the United States Military Academy at West Point.” The article claims that the “leaked document” is an online speech of Pompeo delivered at the US Military Academy in June 2020. But for some reason, pro-CCP media decided to publish it in August this year.

The archived article again misquotes Pompeo as saying, “You may understand that the secret weapon that President Trump said is by no means a small bomb but the new coronavirus that is currently circulating in the world.” It falsely quoted Pompeo as saying, “this leak made our lives better and made America great again!”

The ongoing wave of the Covid-19 outbreak in China is wider and deadlier than all earlier waves in the Communist country. The Delta variant is known to spread like wildfire. Already, mainland China seems engulfed with the new Covid-19 variant. Most previous outbreaks didn’t spread far beyond a city or province. This time, cases have been confirmed in more than 35 cities in 17 of mainland China’s 31 provinces and regions.

While the total number of ‘official’ cases is still in the hundreds, they are far more widespread than anything China has dealt with since the initial outbreak that devastated it in early 2020.

For the CCP, handling the growing sentiment against due to the spread of the Delta variant is a major priority. The Communist Party will not want to take a major share of the blame for landing the people of the country in the midst of a public health emergency, and the pro-CCP media finds it convenient to blame the US and Trump or Pompeo for the Covid-19 Pandemic.

Moreover, the Chinese nationals do have a soft corner for former US President Donald Trump. For Chinese nationals, Trump is a symbol of hope. They see him as the man who will free them from the clutches of the CCP.

When Trump was banned by big tech, there was a visible meltdown on Chinese social media. Chinese citizens were apparently questioning why the outgoing US President was censored. Some of them even drew an analogy between what happened to Trump and the censorship culture in China.

As the US President, Trump was very clear about how he hated the CCP and not the people of China. For the Trump administration, the CCP was the perpetrator and the people of China were simply victims of the CCP rule. In fact, the US Secretary of State Mike Pompeo made a conscious effort at not referring to Xi Jinping as the “President of China”, and addressing him as the “General Secretary of the Chinese Communist Party (CCP)” instead.

The CCP knows that if Trump comes back to power in the US, it might incite and embolden the Chinese nationals to go all out against the Chinese government and overthrow the CCP regime. Thus, to block the love affair between its own citizens and Donald Trump, the CCP is running a smear campaign against Trump and Pompeo.