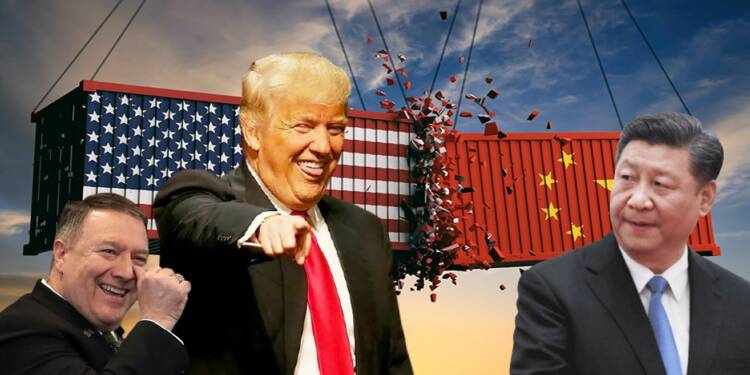 Former US president Donald Trump is a master negotiator. “Trade wars are good, and easy to win” was his mantra during the years of his presidency. His strategies would be straightforward, but difficult to execute for those lacking confidence and courage. China came to realize this only after the 15th of January in 2020, when the phase-1 trade deal between the US and China was finally hammered out after months of negotiations.

Also read: ‘USA allies must stick to their anti-China agenda’, Mike Pompeo makes it very clear that Trump will be coming back to power and decoupling with China is inevitable

Media reports accessed by TFIGlobal now reveal that the trade deal signed during the Trump administration had left Chinese President Xi Jinping stunned and red-faced. It was only after that, that Jinping decided to crack the whip on Jack Ma and Chinese vice president Wang Qishan, who had allegedly put the Chinese president in a hot seat after agreeing to the back-breaking terms and conditions of the trade deal that Jinping himself would never have agreed to.

Make no mistake, negotiations on China’s part were being influenced by the advisory board of the Tsinghua University School of Economics and Management. Xi had always treated this advisory board, his own alma mater, with particular respect.

Alibaba’s Jack Ma and former Chair of the China Development Bank Chen Yuan, were among the top influential players of the advisory group. Vice President Wang Qishan also reportedly wielded great influence over the business relations between the US and China.

The first signs of this relationship between the advisory board and the presidential office began emerging in 2017, before then-president Donald Trump visited China.

Tensions were running hot between the two powers and a big trade clash was speculated before Trump’s visit. Jinping had then rushed to meet with the advisory board members of the elite Chinese university, where he would stress the importance of a “mutually beneficial” relationship in front of the US business leaders such as Facebook CEO Mark Zuckerberg and Apple CEO Tim Cook.

A $200 billion deal was agreed upon by the Chinese negotiators, which eventually paved the way for the 2020 phase 1 trade deal between the two biggest economies. The trade deal came as a massive success for Trump’s no-holds-barred trade war against China, which required the communist nation to buy $200 billion more of US goods and services split over 2020 and 2021.

For an export-based economy like China, achieving the target was simply unimaginable. Chad Bown, a senior fellow at the Peterson Institute for International Economics in Washington, recently revealed that China’s purchases of US exports through August 2021 were estimated to be running at just 62% of the trade deal’s targets.

Rattled Jinping now up in arms against the elite group:

So, a rattled Xi Jinping now seems to be punishing all the members of the advisory board of Tsinghua University, who once firmly sat in the driving seat of China’s economic policies.

Jack Ma disappeared from public eyes in November 2020 for a few months. The CCP barred his Ant Group from launching China’s biggest ever IPO in Shanghai. He was grilled by China’s financial regulators for days, forcing him to divest his stake in the financial technology giant.

A similar fate awaited Vice President Wang Qishan, when Xi Jinping last month decided to launch a crackdown against state banks and financial regulators in his quest to downsize his lieutenant.

In April, news emerged that a close aide to another advisory board member, Chen Yuan, was being investigated on corruption allegations. He is said by some to have been among Ma’s backers and reportedly owned stock in Alibaba, which was listed in New York in 2014.

Donald Trump and his state secretary Mike Pompeo were leading the charge against China on the economic front as well, and that explains why the US under the former administration bagged tremendous success in its dealings with China. The subsequent breakout of the Covid-19 pandemic and the assumption of Joe Biden in the White House derailed the Trump-initiated process, but its scars run deep in the Jinping administration to date.