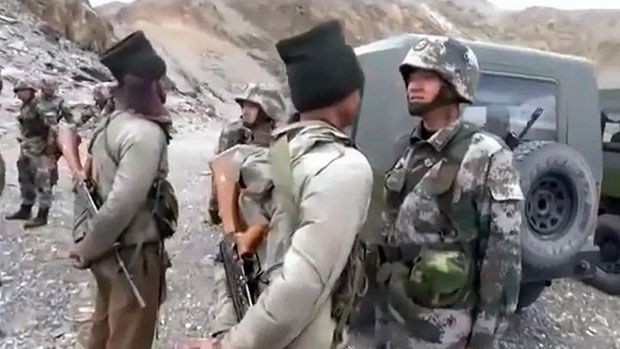 India and China clashed in the Galwan valley last year and China suffered heavy casualties. It seems that China is ready to again lose more heads as news reports indicate that PLA will aggressively ramp up activities on the Indian border in just 2 months’ time.

China triggered the Galwan clash to divert the focus from its domestic issues and allegedly was busy hiding the outbreak of the Coronavirus. The result: heavy casualties on the Chinese side as Indian soldiers seized strategic mountainous heights at Rezang La and others. Now reports are coming in that the PLA will ramp up military activities in Ladakh in 2 months as a second wave of the Wuhan virus sweeps through China. The expected result: more losses on the Chinese side and not just in Ladakh but in the Malacca strait too.

With the Indian Army and the People’s Liberation Army (PLA) frozen in their positions in the polar winter of the East Ladakh sector, national security planners expect China to increase military activity at the friction points when the snow melts at the end of March.

No PLA troops were withdrawn from the disputed points and China used the stand-off to establish advanced landing grounds in Tianwendian across the Daulet Beg Oldi field, and humongous shelters to house personnel and a shorter link from the Hotan airbase to the Karakoram Pass have been constructed. “There could be military pressure north of Depsang bulge,” a senior commander said.

In a portion of the government, there is a view that the PLA is not in a mood to step out of the contested points at least until supreme leader Xi Jinping delivers his speech at the celebrations to mark 100 years of the rule of the Chinese Communist Party. A senior official said, “That is the unfortunate record.”

India is alive with the distinct possibility that China could open fronts in Arunachal Pradesh and around the tri-junction region of Sikkim-Bhutan-India with the PLA ramping up border infrastructure along the 3,488 kilometre Line of Actual Control (LAC). However, after the Galwan flare-up on 15 June and major casualties on the PLA side, China will engage India with only a stand-off weapon and not repeat the mistake of engaging the Indian Army in hand-to-hand combat in the worst-case scenario.

But there is a downside to such a commitment, and China is acutely aware of it. Much as China would like to teach the Indian Army lessons as its state media always warns, Beijing is well aware that the political leadership under Prime Minister Narendra Modi has the capacity to retaliate as it did on 29-30 August 2020 on the south bank of Pangong Tso. For a country that sees itself as a challenger to the super-power position now occupied by the US, any military loss of face to India would take the wind out of that argument.

Moreover, Ladakh is not the only Indian stronghold. India along with other major naval powers is controlling the Malacca Strait between Malaysia and Indonesia and China is growing apprehensive as more than 80% of China’s oil imports pass through the region.

To reiterate the stronghold at Malacca The Indian Military will execute high-intensity offensive and defensive manoeuvres in the Andaman Sea and Bay of Bengal in an exercise code-named Kavach or ‘shield’ next week.

The Kavach exercise comes at a time when the Indian Armed Forces and the PLA are locked in an intense standoff in Eastern Ladakh and there are further apprehensions around another flare-up in 2 months. In a statement, the Defence Ministry said: “the exercise will involve synergised application of maritime surveillance assets, coordinated air and maritime strikes, air defence, submarine and landing operation.”

India’s preparation to not just deter China but to choke it is already underway. Since the Galwan clash, the Indian administration under Prime Minister Modi has taken many steps to ensure that Chinese belligerence at the Indian border is kept in check.

Xi Jinping is in troubled waters; he is afraid of a mutiny from its Western Theatre Command and domestically is facing another wave of the Wuhan virus as million people have been put under lockdown in Beijing. Similar to last time Xi Jinping will try to divert media attention to border clashes with the Indian side but this time India is ready not just in Eastern Ladakh but also at Malacca when push comes to shove.