Ladakh, Australia and Jack Ma – Jinping was hailed as a shrewd leader, but he has been exposed as a shortsighted dimwit 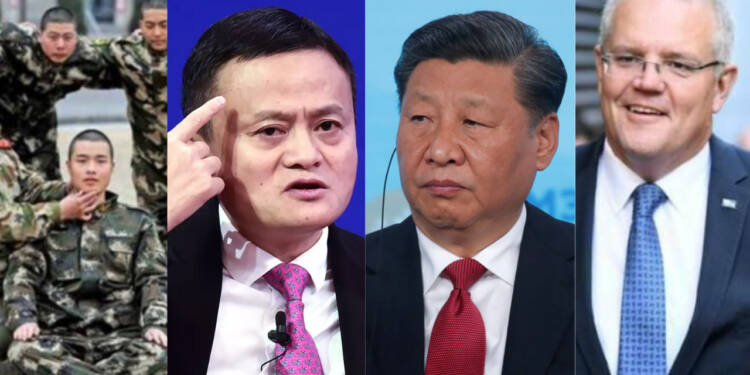 For several decades, so-called geopolitical experts have remained fixated with China. They have successfully built an aura around Chinese leaders. So, uncharismatic Chinese Presidents, including the incumbent- Xi Jinping, are often seen as too shrewd to handle for the free world.

But Jinping’s recent blunders are killing his image as a shrewd leader. His three misadventures- Ladakh, Australia and Jack Ma have backfired substantially. And now, Xi has been exposed as more of a short-sighted dimwit.

When the Wuhan virus Pandemic made China the centre of global fury, Jinpingdecided to step up military aggression and assert Chinese hegemony. But the Chinese President seems to have underestimated the Indian Army’s muscle power. At the same time, Jinping seems to have no idea about the limitations of his People’s Liberation Army (PLA).

As the Chairman of the Central Military Commission (CMC), it is almost certain that Jinping directed PLA’s mobilisation at the Line of Actual Control (LAC) – the effective Indo-Tibet (China administered) border, in Eastern Ladakh last year. But soon the world came to know that Beijing had committed a huge blunder.

Read More: 15/06/2020: When their father-like CO was killed. 16th Bihar soldiers went deep inside China and killed everyone in sight

In June last year, the PLA troops tried to surprise India with an aggressive manoeuvre. There was heavy bloodshed at the Galwan Valley region of Eastern Ladakh. But the Indian Army retaliated with its full might. The paper dragon suffered heavy casualties, so much so that the Jinping administration never released the actual figures to avoid domestic backlash.

Later, it turned out that Chinese mainland troops have turned ineffective in face of harsh winters and sub-zero temperatures at the LAC in Eastern Ladakh. On the other hand, India’s battle-hardened and well-acclimatized troops have sustained themselves much more easily.

Today, Jinping is unable to withdraw his PLA troops from the LAC without losing face. The Sino-India standoff continues even as PLA troops keep getting buried in the Himalayan snow. As such, Jinping has exposed PLA’s vulnerabilities to the entire world.

Will you ever irk a country from which your country imports food, meat, wine and raw material for industries? Well, Xi would. China is a huge importer of Australian products. Till not very long ago, China was a huge importer of Australian barley, wine, coal and meat. But when Australia’s Prime Minister wanted the world to fix accountability for the Chinese virus outbreak, Jinping wanted to show off his wolf-warrior diplomacy.

Jinping’s desperate tariffs war against Australia hasn’t hurt Canberra as such. The Scott Morrison government has found new markets in like-minded countries like India. But China’s cities have been turning dark and its industrialists are going out of business due to sheer lack of Australian coal. Also, China has lost all its leverage in Sino-Australia trade ties.

Today, China is dependent on Australian iron ore, as there is simply no other country that can fuel the paper dragon’s mammoth steel industry. Now, Jinping has to keep Morrison in good humour because if Canberra finds other markets for diverting its iron ore exports, Chinese steel mills and infrastructure companies would simply go out of business.

So, Jinping’s wolf warrior diplomacy has led to Beijing losing a trustworthy trade partner, and now China finds it too hard to secure its iron ore supplies.

You are an insecure leader with a mediocre personality. Suddenly, a billionaire entrepreneur starts making headlines for his philanthropy and innovative business strategy, besides all the money that he has earned.

Read More: Of coups and wars: Xi Jinping is about to force a war on China just to stay in power

For some reason, you feel intimidated, so what will you do? Raise your game and show a little charisma? Well, this is China. Why should Jinping raise his game? So, the Chinese President decided to annihilate the entire Chinese tech industry and permanently undermine the threat that he thought he faced from the Alibaba founder.

The Chinese tech industry, of course, lost billions of Dollars and the world also noticed how Jack Ma has gone missing for the last two months. But firstly, Jinping doesn’t care about the private sector losing billions of Dollars and secondly, Jack Ma isn’t missing– State media says he is ’embracing supervision’ for criticising the Jinping administration.

All we say is that there should be an alternative to losing billions of Dollars, even if Jinping desperately wants to stay in power. But then, the Chinese President obviously is not shrewd.

Of coups and wars: Xi Jinping is about to force a war on China just to stay in power