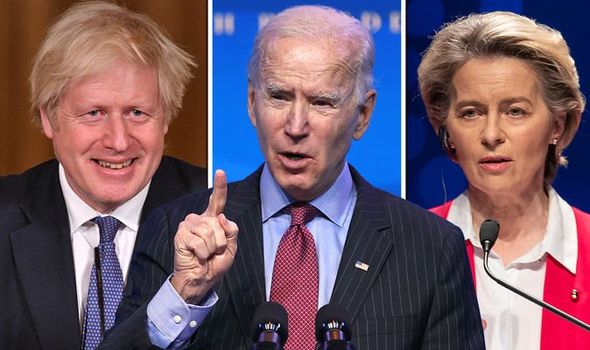 After securing one of the best possible deals in Brexit, Biden seems to be pressurising Boris to re-enter the European Union. Biden seems adept to intensely press his left-leaning dogmas on US allies and it is now pressuring Britain to rejoin the bloc again.

Boris Johnson, Prime Minister of the United Kingdom, shared an amiable relation with  Donald Trump who shared UK’s pro Brexit ambitions. The UK-US relations hold a special place in the foreign policy chapters of these nations. Throughout history, both these nations have irrevocably supported each other. But with the changing dynamics of the European Union, post-Brexit has amassed tremendous pressure on the UK incumbent to balance this special relationship while also pursuing Britain’s national interest as Biden pushes the United Kingdom back towards the European Union.

A former foreign policy adviser to the UK and the EU, Ben Harris-Quinney has said that President Biden will eventually want the United Kingdom to re-join the European Union.

The president of the independent think tank, the Bow Group, argued that Biden will not give the United Kingdom a better deal than what the US has with the EU at present, worrying that it could fuel an exodus from the bloc.

Speaking to Express.co.uk, Mr Harris Quinney said: “We have a President who will consider the EU, not Britain, to be his closest ally, and ultimately will want Britain to rejoin the EU in the future.

“Biden won’t agree to any deal that gives us a clear advantage over the deal the US has with the EU, or that makes it more likely other nations will want to leave the bloc in the future,” Mr Quinney further added.

Mr Harris-Quinney described the failure to seal an agreement during President Trump’s term in office as the “one of the greatest foreign policy catastrophes in recent British history”.

He added: “President Trump was a more passionate believer in Brexit than Joe Biden, he is also a committed Anglophile.”

“We had four years to agree on a deal while he was President that would have given us a competitive advantage over the EU in our biggest global trade deal, which was one of the fundamental factors of Brexit being a success in the short to medium term.”

Earlier this month – Biden stated he would not enter into any trade deals with other countries and would favour domestic investment. While the EU already has a trade deal in place with the US, UK would now have to wait at the ‘back of the queue’ as was famously quoted by Barack Obama.

He told the New York Times: “I’m not going to enter any new trade agreement with anybody until we have made major investments here at home and in our workers and in education.” Mr Biden added: “I want to make sure we’re going to fight like hell by investing in America first.”  Thus, quelling any signs of a UK-US trade deal and indirectly forcing the UK to rejoin the European Union.

Biden served as Vice President under Barack Obama when the UK famously voted to leave the European Union. Mr Obama was not in favour of the decision; mirroring his policy on the European Union, Biden is also opposed to the idea of having separate deals with the UK and the EU.

During a speech at Chatham House in 2018, Mr Biden admitted he would have voted to stay in the EU if he was British Citizen and claimed “US interests are diminished” with the UK following Brexit.

The US elections had an effect on countries with good ties with President Trump. The unique ties between the UK and the US no longer look so special. Biden’s determination to coerces the UK- US’s most special and trusted ally, to rejoin the European bloc would be one of the darkest pages in the relations between the two states. Throughout his campaign, Biden was talking about American alliances. Yet, within a week of assuming office, he has made every single US ally uncomfortable and angry especially the United Kingdom.

“Come on, give me a break,” Biden’s response to a reporter asking him about his Vaccine strategy