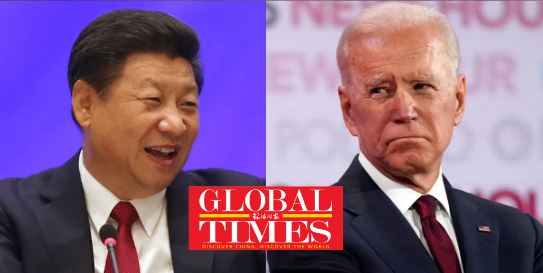 Since his first day in office, Joe Biden has been trying to play down the threat of China and normalise the relations of US-China the best he can, without damaging his reputation. However, with the US allies internationally and citizens domestically not agreeing on the idea of a cooperative USA vis-a-vis China, Biden has been trying to portray himself as a tough guy against Beijing. The Chinese Communist Party mouthpiece Global Times has, however, called out this farce and termed these tough talks as ‘plain rhetoric’.

The Global Times noted that although Biden called China the “most serious competitor” of the US, which has continued the previous administration’s basic attitude toward China, yet he also expressed his willingness to cooperate with China in some areas.

The foreign policy of the US has seen a sudden change. However, the sad part is that it was not for the better. As per a Reuters report, a former official at the Office of the U.S. Trade Representative (USTR) stated that while trade will be a part of President Joe Biden’s overall negotiation policy with China, it won’t be the driving force in Sino-U.S. relations, as it was under former President Donald Trump.

In short, the new Biden administration’s approach towards China will not prioritise the Trade imbalances and the malpractices of the Chinese Communist Party vis a vis its trade policies. While this was being predicted for a very long time, nobody could have imagined that the administration will be so overt about the change in the foreign policy. By this action, the USA has expressed its inclination to giving China a free hand in Asia and in a way has accepted the Chinese supremacy in the region.

In addition to this, ahead of the elections, Joe Biden had taken a very conservative approach when specifying the Indo-Pacific region. Trump had used the term “Free and Open” Indo-Pacific to band US allies together for the containment of China. After the election, almost true to his words, Joe Biden has changed it to “Secure and Prosperous” Indo Pacific. The change is a signal to all the Indo-Pacific states that Washington has a desire to engage Beijing for a peaceful and thriving Asia-Pacific.

The Global Times opinion piece mentioned that, after taking power, Joe Biden has shown caution in policy announcements in terms of China. The new team in the White House seems to be shaping an expectation among the US citizens – the new government will keep playing tough with China and at the same time, it will adjust the previous administration’s practices and carry out cooperation with China in some areas. They will not easily reveal how to do it, maybe because they have not yet figured it out, or maybe they have felt the political sour point in adjusting their China policies. But even if they make relevant adjustments, they will still show a tough attitude in their rhetoric.

Global Times has called Joe Biden’s policy projection ‘plain rhetoric’ and ‘substance-less’. The fact that the USA, which used to bring terror to the minds of the Chinese experts, is being sidelined goes a long way to reveal where Washington has reached internationally.