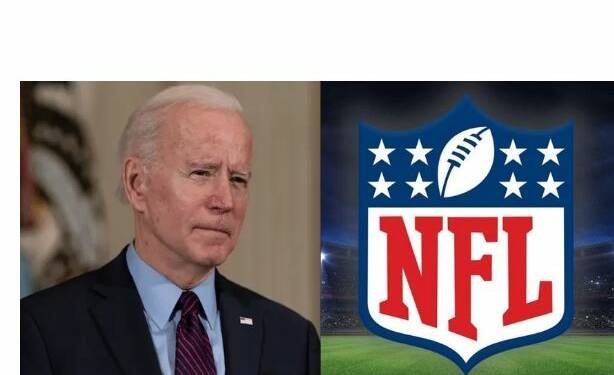 The US President Joe Biden is ruining American sports with his divisive politics, and a habit of emulating Canadian Prime Minister Justin Trudeau when it comes to stamping authority on societal norms. Biden wants to capitalise upon his agenda against ‘White Supremacism’ by interfering in the administration of the National Football League (NFL).

During a Super Bowl halftime interview Sunday evening, Joe Biden tried to make an issue out of lack of Black coaches in the NFL and urged teams to diversify their hiring process. During the interview, Biden told Westwood One, “You’ve got to go out and look — there’s innumerous incredibly qualified African American coaches out there.”

To buttress his proposal, Biden tried to make a reference to his deputy, Kamala Harris. The US President said, “I don’t know how many, when I picked a Black woman to be vice president, I don’t know how many hundreds of thousands of little girls just said, ‘I can do that.’ … It matters, it matters.”

He added, “And I don’t understand why they cannot find, because they exist, so many African American coaches that are qualified, that should be in the pros in my view.”

Now, the remarks that Biden made are quite troublesome. We know Joe Biden might have a political agenda behind his Cabinet nominees, as he wants to drive a political point home. But we have only one message for Biden- let sportsmen decide how sports are played and don’t make them a victim of your petty, divisive politics.

Biden’s political interference in the administration of sports is already taking a toll on American female athletes. Recently, the US President signed an executive order removing the concept of ‘gender in sports’.

The move soon turned out to be controversial as Selina Soule, an established female athlete spoke up for protecting the rights and identity of sportswomen in the US. Four accomplished female athletes filed a lawsuit in federal court in Connecticut in February 2020. The lawsuit was filed by the athletes who were fighting for their right to be sportswomen after they kept losing track meets to ‘biological males’ who identify as females’.

Biden wants to emerge as a social justice warrior, but he did what most of such wannabe warriors end up doing- make vapid remarks and decisions.

Take Biden’s NFL agenda, for instance. Why does it have to be about the colour of the coaching staff? Why cannot we let the NFL teams select coaches as per merit? The National Basketball Association (NBA), for example, has a predominant composition of black players and no one complains about the sheer lack of White players.

Biden says that there are “incredibly qualified African American coaches out there.” But how can Biden claim that? He is a career politician with literally no experience in sports or sports administration. How is he qualified to decide who is qualified to be an NFL coach?

Right now, Biden is only speaking about the perceived lack of Black coaches in NFL. Tomorrow, he might enforce the quota system in the sport. At the end of the day, sportsmanship is the biggest victim and Biden’s divisive politics the biggest culprit.