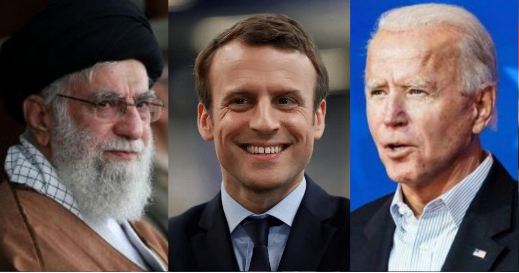 French President Emmanuel Macron seems to have outplayed his American counterpart, Joe Biden. The US President was trying hard to revive the 2015 Iran nuclear deal, officially known as the Joint Comprehensive Plan of Action (JCPOA). But Biden hasn’t been able to bring Tehran and Washington back to the diplomatic table, and now Macron has intervened to kill whatever little possibility of the Iran nuclear deal revival still existed.

Last Thursday, Macron proposed, “I will do whatever I can to support any initiative from the US side to re-engage in a demanding dialogue, and I will… try to be an honest broker and a committed broker in this dialogue.”

But the real intent was to instil a sense of fear in Tehran. Macron batted for Iran’s two main enemies- Israel and Saudi Arabia. This has pushed Tehran further away from the Iran nuclear deal.

Biden’s policy was to engage Iran and ignore the two American allies in the Middle East- Israel and Saudi Arabia. Yet, he was finding it difficult to strike a fair bargain with Iran. Tehran kept insisting that it won’t resume full compliance with the 2015 nuclear deal unless Biden removes the punitive sanctions that were imposed by Trump. However, removing any sanctions would be nothing less than political suicide for the Biden administration.

But Macron’s intervention makes matters even worse for Biden. Macron not only offered to mediate but also tried to push Saudi and Israeli participation in any effort to halt Iran’s nuclear programme.

The French President said, “We have to find a way to involve in these discussions Saudi Arabia and Israel because they are some of the key partners of the region directly interested by the outcomes with our other friends of the region.”

Macron’s bid to intervene triggered a sharp reaction from Iran. Iranian Foreign Ministry spokesman Saeed Khatibzadeh said, “The nuclear deal has no need for a mediator.”

Iran is scared of French intervention and now it has started putting even more pressure on the Biden administration. On Sunday, Iran’s Supreme Leader Ayatollah Ali Khamenei said that the US must “completely lift” sanctions first followed by an Iranian verification, as a necessary pre-condition for Tehran to resume its nuclear deal commitments.

Macron’s bid to intervene has created such pressure that Biden has been forced to budge on the Iran front. On Sunday, Biden refused to lift sanctions as a quid pro quo for getting Iran back to negotiate the nuclear deal.

So, Biden has at least temporarily dropped the idea of removing sanctions. As such, there is a growing realisation within the Biden administration that the Iran nuclear deal might never happen.

Biden came with a lot of vindictiveness against Trump on the Iran front, but there is a high chance that he won’t be able to revive JCPOA at all. As such, Biden is feeling compelled to sober down and he is unwillingly moving in the direction of continuity with Trump’s foreign policy.

For Biden, reversing Trump’s policies is proving to be an uphill task. And then, there are always risks attached to any disruptive moves like losing political clout or upsetting allies. Macron, on the other hand, is going full Trump with his policies. Yet, he is doing that in a way to pave the way for a stronger Europe which remains free of American foreign policy obligations. And he has started that by torpedoing the Iran nuclear deal.

‘Xi is so bright, Xi is so tough,’ Joe Biden kneels before Jinping and defends China’s authoritarian system