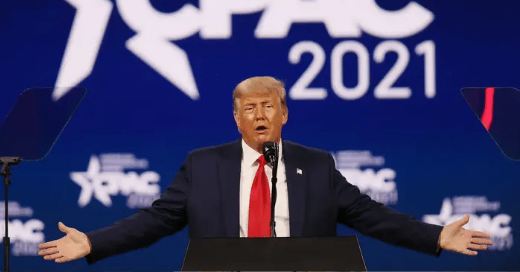 Former President Donald Trump made a spectacular comeback to the political scene with a huge uproar. His supporters gave him the welcome he deserved and underlined that the Republican Party is indeed Donald Trump’s party. During his speech, he united his supporters and accentuated his importance in the GOP as he ripped into his dissenters in Mitt Romney, Mitch McConnell and Liz Cheney.

There were rumours that Trump is all set to form a new political party called the Patriot Party. During his farewell speech from the White House, he had said, “So just a goodbye. We love you. We will be back in some form.” It was since being insinuated that Donald Trump is done with the Republican Party and vice-versa. Experienced GOP leaders like Mitt Romney and Mitch McConnell had dissented against their leader and it looked like Trump was finally on his way out but truly wasn’t. Trump came back stronger than ever with his popularity reaching newer heights. He united the Republicans against the Democrats and has shown that he is fully in-charge and not those who tried to sabotage him.

He called it a ploy of the Democrats and it was that rightly so. The mainstream media had popularised the narrative that Trump’s new party is en-route. They hated the guy and then went gaga and insinuated that Donald Trump is coming up with a new party. They did that to divide the voters and failed spectacularly. During the speech, Trump said, “No. Wouldn’t that be brilliant? Let’s start a new party and let’s divide our vote so that you can never win. No, we’re not interested in that.”

After setting the agenda, Trump went on to stamp his authority on the Republican Party and leaders alike. He completely tore apart the dissenters who tried to “internally sabotaged” him. The Democrat moles in the GOP like Mitch McConnel, Mitt Romney and Liz Cheney among others witnessed their careers decimated to the point of no return.

He said, “Now more than ever is the time for tough, strong and energetic Republican leaders who have spines of steel. We need a strong leadership. We cannot have leaders who show more passion for condemning their fellow Americans than they have ever shown for standing up to Democrats, the media, and the radicals who want to turn America into a socialist country.”

He added, “During the Obama years, and now during Biden, if you spent the same energy on attacking them, you’d actually be successful as you do on attacking me, in many cases. The Democrats don’t have grandstanders like Mitt Romney, little Ben Sasse, Richard Burr, Bill Cassidy, Susan Collins, Lisa Murkowski, Pat Toomey, and in the house, Tom Rice, South Carolina, Adam Kinzinger, Dan Newhouse, Anthony Gonzalez. That’s another beauty. Fred Upton, Jaime Herrera Beutler, Peter Meyer, John Katko, David Valada and of course the warmonger, a person that loves seeing our troops fighting, Liz Cheney.”

Earlier, Trump had torn into Mitch McConnell for his remarks on Trump’s acquittal in the Senate after the impeachment trial. Trump went as far as insinuating that McConnell’s “lack of political insight, wisdom, skill and personality” has jeopardised Republican candidates.

After destroying the careers of incompetent captains in the Grand Old Party, Trump went ahead and addressed the need to unite the Republicans, the way only he can. No other senior leader can do it the way Trump can. And he made sure his supporters stand strong behind him and back him in his fight against the Democrats.

He said, “We will be united and strong like never before. We will save and strengthen America. And we will fight the onslaught of radicalism, socialism, and indeed it all leads to communism once and for all.”

He called for united republican support against the Biden administration. Trump added, “They’re vicious, they got everything going, but their policies are no good. So hence, we have congratulations, the Republican Party. After this, they may not stick with those policies. We have to be careful. No, their policies are horrible. Think of it, defund the police. How did that work out? But if Republicans do not stick together, the rhinos that we’re surrounded with will destroy the Republican Party and the American worker and will destroy our country itself, the rhinos, Republican in name only, but the Republican Party is united. The only division is between a handful of Washington DC establishment political hacks, and everybody else all over the country.”

Trump underlined the unity in Republicans as it got clearer and clearer that he is the face and the one who can lead the GOP. He said that he will work hard to elect strong, tough and smart Republican leaders, and the people believed him as they enthusiastically shouted, ‘USA!, USA!’ over and over.