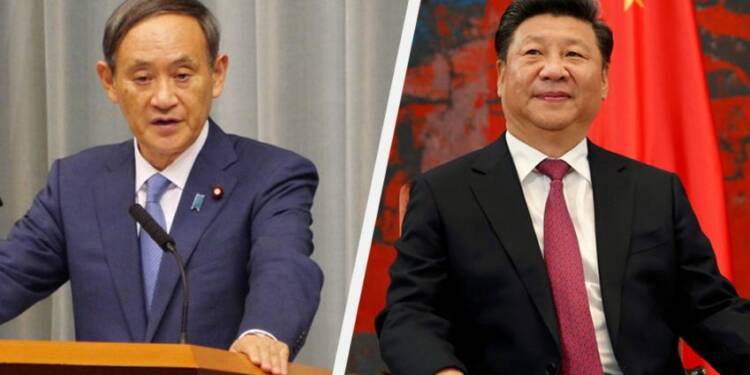 China has been finding it extremely difficult to placate Japan – a country which not till very long ago used to be a pacifist in its geostrategic approach. Then Shinzo Abe came in and now his successor, Prime Minister Yoshihide Suga is carrying forward the policy of Tokyo completely, abandoning pacifism to take up the cause of Indo-Pacific activism, using force if necessary. The Chinese Communist Party and its General Secretary – Xi Jinping have not given the same a miss. They have been working overtime to woo the Suga administration. However, Japan is not relenting and has once again slapped Beijing with a grand snub.

It is no secret that Xi Jinping has been eyeing a one-on-one conversation with Yoshihide Suga, by no less than trying to land in Tokyo for the purpose of a state visit. However, Japan has been postponing the CCP General Secretary’s visit for the past one year.

According to Reuters, it has now been communicated by Japan that Xi Jinping will not be making a state visit to the island nation in 2021 too. It has now almost become a monthly affair for China to be insulted by Japan, on no less than the subject of Xi Jinping’s desire to visit Tokyo.

Yet again, news of the Suga administration making it clear that Xi Jinping is not welcome in Japan has been ascribed to the prevailing pandemic situation in both countries, although the world is fast pacing towards normalcy. The continued postponement of Xi Jinping’s visit to Japan by the Suga administration is no less than a resounding message to Beijing that Tokyo wants to have bare minimum ties with it, and that Chinese belligerence is no longer welcome in the East China Sea.

As a matter of fact, China’s own policy viz., Japan has been a hot mess. It almost bears similitude to a pendulum, wherein Beijing frequently jumps from its position of trying to placate Japan to stepping up aggression against it.

It is for this very reason that in December last year, Xi Jinping himself skipped the 83rd anniversary of the Nanking Massacre by Japanese troops during World War II, in which an estimated 300,000 Chinese people were killed. Soon after, China’s Foreign Minister Wang Yi invited his Japanese counterpart Toshimitsu Motegi to visit China this year, even as the Defence Ministers of the two countries held a telephonic conversation in December itself.

At the core of these gestures and talks by China lies the CCP’s sole intention of fixing a state visit for Xi Jinping to Japan. Evidently, none of these efforts have borne fruit. Having failed to woo Japan with gestures of kindness and friendship, China tried to scare Tokyo by stepping up aggression in the East China Sea, particularly around the Senkaku islands – which are sovereign Japanese territory.

Xi Jinping, having been humiliated by Japan several times now, took to granting permission to the Chinese coast guard to open fire on foreign vessels immediately, even if such vessels are in disputed waters.

To begin with, the South China Sea and the East China Sea are disputed territories solely due to the ridiculous claims of China, which asserts its own sovereignty over such waters due to unestablished historical records and the nine-dash line claim. The Senkaku islands are recognised as sovereign Japanese territories by all, except China, which contests Tokyo’s ownership of the islands and calls them its own, under the name ‘Diaoyu’.

The new bill also gives the Chinese coast guard personnel a green light to demolish structures built on the reefs by other countries in territories claimed by China, notwithstanding the status of the dispute, while also facilitates the coast guard personnel with powers to board and inspect any foreign vessels in Chinese-claimed waters.

Relations have soured big time between Japan and China ever since Xi Jinping gave his coast guard such astronomical powers. Interestingly, the Chinese coast guard vessels are themselves illegally hovering all around the South and East China Sea, while they should strictly be contained within Beijing’s actual exclusive economic zones. In response to China’s aggression, Japan has itself started overhauling and weaponising its self-defence forces and the coast guard.

Just when the Covid-19 pandemic was peaking worldwide last year, Japan’s ruling party had passed a resolution calling for the cancellation of Xi Jinping’s planned state visit to Tokyo. Ever since Jinping’s state visit to Japan is being postponed.

It must be remembered that the China-manufactured pandemic has been especially detrimental to Japan, which was scheduled to host the Summer Olympics in March 2020 but had to postpone the athletics-gala event. The official cost of the Tokyo Games is $15.4 billion, which makes it the most expensive Olympics on record. And several national audits suggest the real costs might be twice that much. However, the Chinese pandemic clouded Japan’s moment of glory last year.

So, it is not as if the Japanese would be particularly willing or enthusiastic to lay out the red carpet for Xi Jinping – the man who is at the centre of a majority of the world’s problems right now. Therefore, by once again postponing Jinping’s state visit – by a year no less, Japan has made its intention of keeping a safe distance from China known to all.