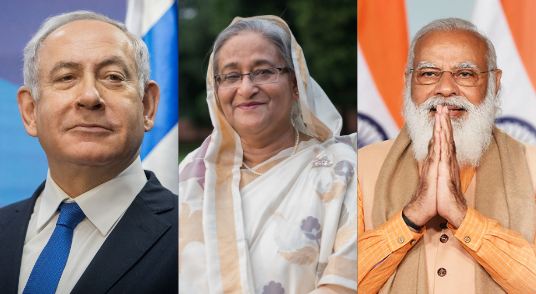 Since the second half of last year, Israel, under Prime Minister Benjamin Netanyahu, has been on a diplomatic winning spree. It has achieved what many foreign policy pundits would have called impossible. Since the initial signing of the Abraham Accords, it has succeeded in normalizing relations with multiple MENA (Middle East & North Africa) nations and in the process ended its isolation in the region. It has also succeeded in achieving the de-hyphenation of relations with Israel and the Palestine issue.

After achieving near-absolute normalisation with the Middle Eastern states, and an understanding with Saudi Arabia, the Israeli diplomatic steamroller has moved towards South Asia which has one of the highest population of Muslims. Benjamin Netanyahu has now set his sights on the Islamic Republic of Bangladesh. According to an investigative report by Al-Jazeera in February, the two countries seem to have been on friendly terms for the past few years.

However, it has been deliberately kept out of the public eye, since currently Bangladesh does not recognize Israel and forbids its citizens from visiting there. People familiar with the developments in the region suggest that the USA is facilitating the talks with the help of India and the Indian Prime Minister, Narendra Modi. These talks can also be considered as a precursor to what could be an extended Abraham Accords.

A new investigation led by Doha-based Al-Jazeera revealed that Bangladesh purchased Israeli-made surveillance equipment that can be used to track and monitor hundreds of people’s cellphones, in spite of Dhaka not recognizing Tel Aviv. Documents and statements obtained by Al Jazeera’s Investigative Unit show that the Bangladesh army purchased the Israeli equipment in 2018 using a Bangkok-based middleman and Bangladeshi military intelligence officers were trained in Hungary by Israeli intelligence experts.

India has a lot of influence in the Indian sub-continent. And the fact that Bangladesh and India enjoy a very deep relationship, it is highly likely that backchannel talks were facilitated by India itself. The other example of the normalisation of relations with Israel in the region is Bhutan and we all know that it was India that had facilitated those deliberations. India that had organised the establishment of diplomatic relations between Bhutan and Israel.

Read more: Maldives, Sri Lanka and Bhutan: How India partnered with the US and Israel to keep its neighbourhood clean of Chinese influence

Bangladesh would gain more than a few things by developing a working relationship with Israel. Basing the argument on the accuracy of Al-Jazeera’s report, the country’s military intelligence is already using the passive cellphone monitoring and interception systems developed by the Israeli cyber-surveillance company PicSix.

Bangladesh stands to gain a lot in the agriculture sector too. Israel has developed itself as a leading exporter of water treatment, irrigation, and desalination technologies. Bangladesh’s food security has suffered a great deal due to the adverse effects of climate change, compounded by a population of over 160 million people crammed into a landmass smaller than New York state. Bangladesh can develop solutions to its problems caused by its unique topography in collaboration with Israel.

Even in the face of all these gains that could be made, Bangladesh has publicly denied any and all of the claims which mention that it is in any sort of talks with Israel. It is understandable, as the country has historically supported Palestine and the government of Bangladesh would not want to give a point to the opposition to consolidate public opinion against Sheikh Hasina.

However, if Al Jazeera’s investigative report and the people familiar with the region are to be believed, then the backchannel talks between Bangladesh and Israel which are supported by the USA cannot be denied. And if that turns out to be true, then it is likely that PM Modi is facilitating these talks which could lead to a rendition of the Abraham Accord between Bangladesh and Israel.