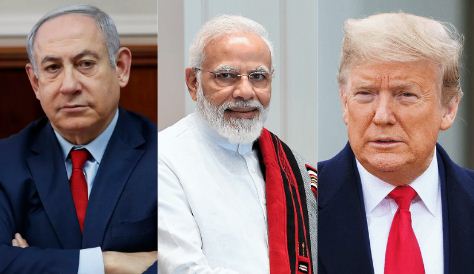 As the latest step to counter China’s expansionist attitude in India’s neighbourhood, India has organised the establishment of diplomatic relations between Bhutan and Israel. The Himalayan Kingdom which is an all-weather friend of India recently had to face the aggressive behaviour of new-imperialist China. Beijing, through the occupied territory of Tibet, had tried to capture the Bhutanese land and has reportedly been undergoing construction activities in the border areas.

Because of the warm relations between India and Israel and a personal rapport between Indian Prime Minister Narendra Modi, India’s trade with Israel is increasing manifolds steadily. India desires for Bhutan to gain from the technical expertise of Israel in several fields including agriculture and defence.

Since China is making offence at its border with Bhutan a lot recently, India must bring its important defence partner Israel into the fold. The fresh relations between Israel and Bhutan further strengthen New Delhi’s ties with Jerusalem. This also benefits the quad efforts to limit China on all fronts. Bhutan already had cordial informal ties with Bhutan but with India facilitating officiating of those ties, both countries stand to gain.

When Colombo recently hosted the India-Sri Lanka-Maldives trilateral maritime security dialogue, it showed India’s commitment to sub-regional peace and security. Both the countries are India’s important maritime neighbours and have shared close relations with Indian civilisation for centuries. The NSA level talks that were held was a demonstration to China that despite its efforts to thwart the unity of the region, the countries remain committed to respecting each other’s concerns and emotions. China has been trying to meddle in the domestic politics of these countries too.

It has a record of inciting violence in the countries so it can serve its economic motives. Some countries tend to fall prey to China’s jingling wallet but they soon realise that there is more loss than gain. The US had signed defence cooperation and maritime security framework with the Maldives this September. China too has been trying to curb the sovereignty of Indian Ocean countries for quite long.

Scholars had noted that it was done at the insistence of India and Quad nations to curb China’s expansionism in the Indio-Pacific region. Under the influence of corrupt President Yameen, Maldives’ debt to China had soared to $3 billion. Thankfully he is serving five years behind the bars now. Even when Mike Pompeo visited Sri Lanka, he told the media that the China threat is real and the ‘predator’ China is harmful to global peace and security.

India is showing China that through the means of friendship and peaceful coexistence it can provide its small neighbouring countries with an opportunity to lift themselves on the world scale. This is exactly what is close to China provides- isolation from world affairs – exactly the case of Pakistan under an immense debt trap.

Friendship with India comes with the benefits of shared responsibilities and a democratic way of functioning, on the other hand, friendship with China usually results in ceding territories to it. The world clearly witnessed what China had been doing to Pakistan, what it did to Nepal, and Sri Lanka. India has been aiding the countries in the Indian Subcontinent – a major challenge to China. Moreover, India is also facilitating diplomatic and economic ties to these countries in their fight against Chinese bullying and imperialism.

India’s commitment to the value of ‘Sarve Bhavantu Sukhinah’- let everyone be free of sorrows – is now resonating with other countries. They are becoming varied of what Xi Jinping’s malicious intentions are. India is helping the already trapped countries by bringing its friends like the US, Japan, and Israel into the picture.

Beijing’s Belt and Road Initiative which is a new-colonial activity disguised as a development project has been opposed in its member countries. The behaviour of Chinese officials and the deployment of the Chinese military in the host countries have been recognised at last. The world is finally coming to terms with what India has long been telling them. It shall be in the benefit of all to recognise the Chinese threat as soon as possible and grab the ‘mad-dragon’ by its neck.