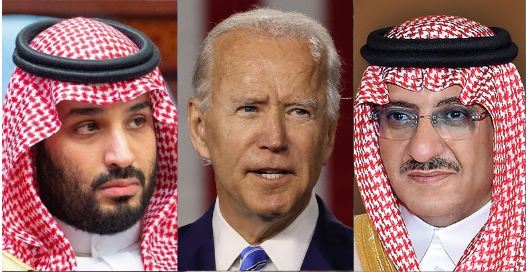 The United States under the Biden administration is acting against most of the things it stands for. If we take the reports at the face value, a former minister in Israel, Yossi Beilin said that in the conversation between Biden and Saudi King Salman, Biden hinted to the king, that it would be wise to replace his son Mohammad bin Salman (MBS) with the man who had to kiss his hand and force him to give up the mandate of the covenant four days ago – Muhammad bin Nayef (MBN).

Joe Biden wants to portray himself as a white knight, and practice false virtue signalling is making sure that the USA’s Middle Eastern ally, Saudi Arabia is never able to get out of the archaic political shell. He wants to unseat Mohammad bin Salman and instead wants Muhammad bin Nayef, the previous crown prince, to replace him.

Former Minister of Justice and Deputy Foreign Minister Yossi Beilin explained that MBS “was the greatest hope for the West, for a moment, his father Salman, the King of Saudi Arabia, was considered a leader for a transitional period, and many predicted that his son, the young Prince Muhammad, would become crown prince.” However, if things would turn as Biden wants them to, then Saudi Arabia will return back to its archaic Islamic practices and the hope for Islamic renaissance will be lost in the process.

Earlier, Biden had reached out to King Salman and downgraded ties with the Arab power’s de facto ruler, Crown Prince Mohammed Bin Salman. He wanted to delete the legacy of the last few years in which MBS became the overarching power centre in Riyadh and the larger region. This is going to have some severe geopolitical repercussions in the Middle East region, which will ultimately take the shape of serious setbacks to the US interests in the region. In addition to the geopolitical impact, it will also take the Kingdom of Saudi Arabia back to the days of extremism and undo all the progressive measures that MBS has undertaken.

Read more: Challenging MBS and trying to unseat him is a dangerous proposition for the USA as the consequences could be grave and immediate.

The ability and farsightedness of MBS cannot be overstated, and by going against him as some sort of personal vendetta, Joe Biden is showing his meek leadership skills. Saudi Arabia for a very long time was only known for two things- Wahabi Islam and Oil money. However, with the coming of crown prince Mohammed bin Salman, the tides have started to change, and Saudi Arabia is becoming more and more proactive as well as collaborative with the larger US allies. This has, in turn, led to the implementation of decisions that show inculcation of astute diplomatic skills.

Under the leadership of MBS, Saudi Arabia has been strengthening its unconventional friendship with countries like India, China and now Russia, and this is due to his brilliant diplomacy. Take, for instance, Saudi Arabia’s friendship with India. In 2019, Indian PM Modi reached Saudi Arabia and gave his full support to Vision 2030 of MBS. At the same time, India and Saudi Arabia became strategic partners and then Riyadh also announced an investment of 100 billion dollars in India.

Read more: Ever since MBS came to power, Saudi Arabia has suddenly started looking like a nation with astute diplomatic skills.

Beilin stated, “The young man was welcomed as a head of state at the White House and other places. He appeared to be pragmatic, modern, attentive, and a genuine representative of modern Saudi Arabia. The world couldn’t wait for his father the king to remove his crown and transfer it to his “liberal” son.” He added, “The Saudi crown prince won the world over when he rescinded the ban on women driving, but he later continued to arrest the men and women fighting for reforms, arrested the country’s wealthy until they agreed to pay taxes.”

The fact that Joe Biden is trying to unseat him shows a lot about the priorities of the new US administration. They just want governments that compromise their national interests to serve the interests of Democrats and the Deep State. Biden is the façade of virtue signalling and is trying to unseat MBS and put someone who is less influential to circumvent their interests.

All this grandstanding is similar to how previous US presidents went to the Middle East and in the name of improving regional stability only pursued the policy of securing the oil fields in the region. However, Saudi Arabia is at a threshold, and as things stand, MBS is creating an example for the larger Islamic world to follow which can lead to the Islamic renaissance. In such times if Joe Biden keeps up his childish insistence on unseating MBS, it will be disastrous for the USA and the world at large.