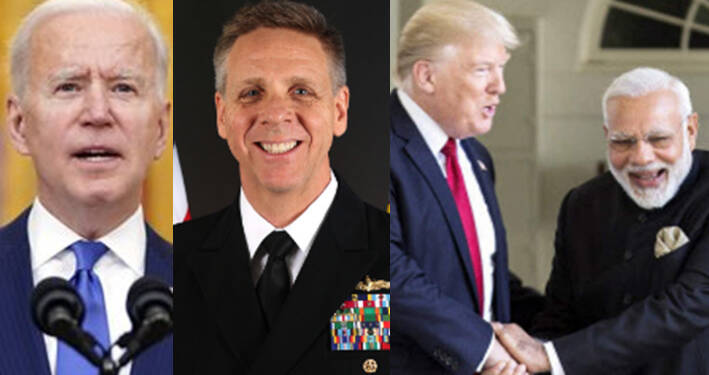 Despite the concerted efforts of Joe Biden to woo China and gain a friend in Xi Jinping, the new President is facing new challenges to placate Beijing with each passing day. President Biden had, in his first month in office, diluted the very concept of a “free and open Indo-Pacific” and made it clear that his administration would work towards a “secure and prosperous Indo-Pacific” instead.

However, China hawks within the US establishment are not making life easy for either Joe Biden or Xi Jinping just yet. Take the most recent bombshell dropped by the USA’s Indo-Pacific Command Chief, Admiral Philip S. Davidson, who revealed before the Senate Armed Services Committee during a Congressional hearing in Washington DC that the Indian and US navies have started sharing information securely. A ‘navy-to-navy’ information-sharing agreement between India and the US was signed in November 2020, which was the time when Donald Trump still had the reins to power in America, and the USA’s foreign policy was not being torn to shreds.

The Indo-Pacific Command chief has turned into quite a headache for the Biden administration. Earlier, the commander of U.S. military forces in the Indo-Pacific region, appointed by President Trump, on the 1st of March, submitted a request to Congress for a whopping $27.3 billion in new anti-China spending. Now, the statement on the US and India actively involved in intel-sharing is sure to irk China further but Joe Biden’s hands are tied.

The US and Indian navies are cooperating and sharing secret and important information with each other. This is bad news for China, which until recently, had to deal with only the American forces present all across the Indo-Pacific. However, after it engaged in a self-destructive border standoff with India, Beijing pushed New Delhi towards the path of pursuing a tough policy on China more rigourously. And now, it has to deal with a formidable naval alliance of India and the United States in a region which it seeks to unilaterally dominate.

As for Joe Biden, the news must be coming in as a disaster. The president has close to no power to prevent enhanced cooperation between India and the US, even though he is the top commander of the American armed forces. This is because enhanced cooperation between India and the United States is being achieved with the help of a number of pacts and treaties signed during the Trump-era. To even try and rescind such agreements will be a disaster like no other for the Biden administration, which is why it can do nothing about Admiral Davidson-led Indo-Pacific command’s cooperation with India.

Admiral Davidson highlighted how the two countries had recently signed the Basic Exchange and Cooperation Agreement (BECA) to facilitate the sharing of unclassified geospatial data and the Industrial Security Annex (ISA) for the transfer of technologies to support defence production. Calling the India-US relationship a “defining partnership of the 21st century”, Admiral Davidson said that India has substantially increased the purchase of defence equipment from the US and that defence sales to India are at an all-time high.

The INDOPACOM chief made it a point to refer to the many Trump-era agreements signed between the US and India, which were today facilitating unprecedented cooperation between the two superpowers. The two countries signed a crucial pact called COMCASA (Communications Compatibility and Security Agreement) in 2018, which provides for interoperability between the two militaries and the sale of high-end technology from the US to India. The Logistics Exchange Memorandum of Agreement (LEMOA), inked in 2016 allows the two militaries to use each other’s bases for repair and replenishment of supplies as well as provides for deeper cooperation.

Admiral Philip Davidson is evidently following former President Donald Trump’s Indo-Pacific policy, and cooperation between India and the US is a pre-requisite in the said policy. Xi Jinping must be infuriated seeing the rising cooperation between the two militaries, despite having his proxy running the White House. The proxy, meanwhile, himself must be feeling helpless, since Admiral Philip Davidson has evidently taken the matter into his own hands.