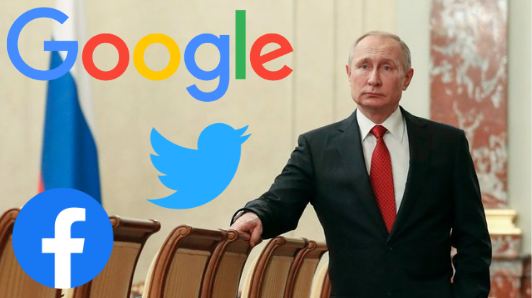 Russia is now the latest entrant in the club of countries that have acted against Big Tech, in order to tame the unofficial conglomerate of American social media and digital companies. Much like in all other countries where American Big Tech has been at the crosshairs of the governments, in Russia too, companies like Facebook, Twitter, Google have found to be acting in stark contestation of the national laws of the land. After having been thrashed left, right and centre by countries like India, Australia, Italy, France, Poland and others, Big Tech is now in for a big whack in Russia.

Russian authorities have sued five social media platforms for failing to delete posts urging children to take part in illegal protests, the Interfax news agency cited a Moscow court as saying on Tuesday. Twitter, Google, Facebook each have three cases against them, with each violation punishable by a fine of up to 4 million rubles (around $54,000), and cases have also been filed against TikTok and Telegram, the report said. As per a Reuters report, the cases were opened after protests nationwide over last month’s jailing of Alexei Navalny, a prominent critic of President Vladimir Putin.

Meanwhile, the Russian government is upping the ante against Big Tech by not just taking on it at a domestic level, but is also vowing to wage an international campaign against it alongside like-minded countries. As per a TASS report, the speaker of the Russian State Duma (lower house of parliament) Vyacheslav Volodin said Monday that fighting Big Tech’s arbitrariness on the internet and protection of the countries’ digital sovereignty need to be discussed on the international level.

“The problem is ripe to be discussed in international formats. It concerns adjusting national legislation, preparing model laws in order to respect the rights and freedoms of citizens, as well as to ensure digital sovereignty,” Volodin said as quoted on the website of the State Duma on Monday. Volodin also quoted the example of countries like India, Italy and Australia, saying that they were now developing proposals “to combat the lawlessness of global IT companies, up to the most serious measures of responsibility.”

However, Russia is not merely talking tough. In fact, Twitter has already been made to face the music. Russia’s communications watchdog said on Wednesday it had restricted the use of Twitter in the country by moving to slow down the speed of the service after it was found to be failing to remove banned content from its website. Authorities will slow access to Twitter on all mobile devices and on half of desktop computers because the company failed to remove content related to teenage suicide attempts, pornography and drug use, internet watchdog Roskomnadzor said in a statement Wednesday. It said access could be blocked altogether if Twitter doesn’t remove the banned content.

Russia’s warning, aided with stern action come as the first and last warning for American Big Tech companies, who have been told to behave themselves and act in accordance with Russian laws if they wish to continue operating out of the country.