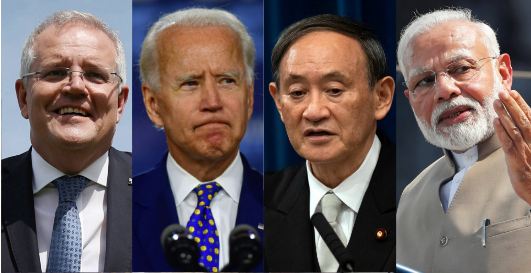 In comparison to its initial foreign policy, the Biden administration has taken a 180-degree turn. The US President who was present in the Quad virtual summit of the member heads of the state, seems to be different from the one who was just recently giving excuses on the Chinese Communist Party’s actions in Xinjiang. The humiliation that the USA faced in the Quad meeting and G-7, made Biden realise that staying soft on China is not an option.

The Quad reminded Biden that his vision of going soft on China will not be well-received. Even during the first meeting of the G-7 leaders at the Munich Security Council, where he tried to regurgitate his rhetoric of ‘America being back,’ wasn’t well received. Joe Biden thus realised his folly and invited the fellow Quad countries for a virtual summit.

These developments have forced Joe Biden to toe the line of his predecessor Donald Trump, under whom Quad was more robust and consolidated. This is further proven by the fact that all the heads of states, be it Indian PM Narendra Modi, Japanese PM Yoshihide Suga, Australian PM Scott Morrison or US President Joe Biden – emphasised the importance of the Quad as the forum for the maintenance of a ‘free and open’ Indo-Pacific and even released a joint statement.

The five pointers in the joint statement included,

These statements are in stark contradiction to what anyone would have expected, had Joe Biden followed his ‘appease China’ rhetoric. However, these are in exact line with what the other Quad members have been advocating for. It goes on to show how Joe Biden has realised his folly and the fact that India, Japan and Australia were successful in showing him the mirror.

Even during the G-7 summit, Biden chose the first public encounter with America’s European allies to characterise the new struggle between the West and autocratic powers, announcing that “America is back” and not all were convinced. French President Emmanuel Macron and German Chancellor Angela Merkel used the platform to shift the focus sharply away from the US. Biden’s message to press the ‘comeback’ of the US leadership was not given much equity by the two European powers as well.

Read more: After Quad meeting, Biden gets his second global humiliation during G7 meet as France and Germany take him to the cleaners

In addition to this, the Quad summit among the member state’s Foreign Ministers had made it clear that the Asian allies will not be happy with anything less than the continuation and further expansion of the activities of the Quad.

To the credit of India, Japan and Australia, the message was clearly well-received. And it was that taking a soft stance on China is not an option and for the USA to maintain its position, it needs to stand by its allies in the Indo-Pacific.