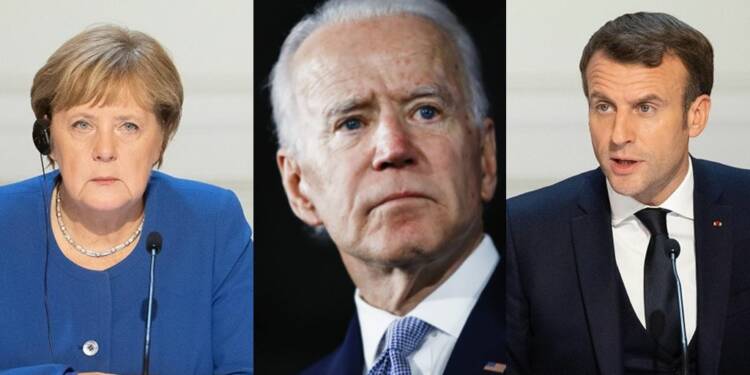 US President Biden has been using international alliances to push his agenda on US allies. The Quad rejected his vision and even in the first meeting of the G7 leaders at the Munich Security Council, where he tried to regurgitate his rhetoric of ‘America being back,’ wasn’t well received. German Chancellor Angela Merkel and French President Emmanuel Macron were not convinced as they talked about a Europe with more autonomy and a level at par with the United States.

Biden chose the first public encounter with America’s European allies to characterise the new struggle between the West and autocratic powers, announcing that “America is back” and not all were convinced.

French President Emmanuel Macron and German Chancellor Angela Merkel used the platform to shift the focus sharply away from the US. Biden’s message to press the ‘comeback’ of the US leadership was not given much equity by the two European powers.

Macron, who is a vocal critic of NATO and Europe’s dependence on the US for its security concerns, made his stand clear once again. In the past, he has criticised NATO for reaching a state of near ‘brain death’ and of no longer being ‘pertinent’ since the Warsaw Pact withered away.

Mr Macron insisted that Europe being able to defend itself better and more autonomous, would make NATO “even stronger than before.”  He said that Europe should be “much more in charge of its own security,” increasing its commitments to spending on defence to “rebalance” the Trans-Atlantic relationship.

In sharp contrast to Biden’s anti-Russia rhetoric, Macron also insisted on the renovation of NATO’s security architecture to involve “a dialogue with Russia.” He also made his distaste over the US’s leadership push very clear. He argued that Europe cannot count on the United States as much as it had done in the past decades and that they “must take more of the burden of our own protection.”

Merkel, on the other hand, was much more receptive to President Biden’s speech but still tempered her praise for the US President’s decision to cancel plans for the withdrawal of US troops from Germany with a warning. She said, “Our interests will not always converge.” This could be a reference to Biden’s hypocritical stand on China and the US’s contempt over the construction of the Nord Stream 2 gas pipeline which would help Russia upply gas to western Europe.

It is the same kind of reception that Biden received in his first meeting with the Quad members. In his push for a change in the concept of the ‘Indo-Pacific’ alliance, Quad was not given due deliberation and was rejected unanimously.

Biden was pushing for a “Secure and Prosperous” Indo-Pacific, a phrase that fails to reflect concerns about Chinese belligerence in the Indo-Pacific waters, especially South China and East China Sea. He had made his stance perfectly clear in earlier instances, where he talked about the region. However, during the meeting, other members of the Quad – Japan, Australia and India stuck with the precedent set by former US President Trump of a “Free and Open Indo Pacific” (FOIP).

It was Biden’s first international humiliation, where he was unable to push the new agenda of the United States. The pushback received during the meeting of the G7 leaders at the “Munich Security Council” meeting was the second of its kind, where the United States, under Biden’s leadership, has been undermined and not deemed trustworthy.

Biden wouldn’t have expected that his first leadership push within the European community would receive such a stern pushback from ‘major’ US allies. He wanted to deepen US ties in Europe but it seems that major European powers do not trust Biden and the US leadership. Being undermined twice by USA’s allies is not only a major embarrassment for the Biden administration but is also reflective of the changing international structure. Now it seems that the US under Biden is condemned to play second fiddle in regions now looking further away from the influence of US projects. Biden is truly the one accelerating the decline of America that he often accused Trump of.