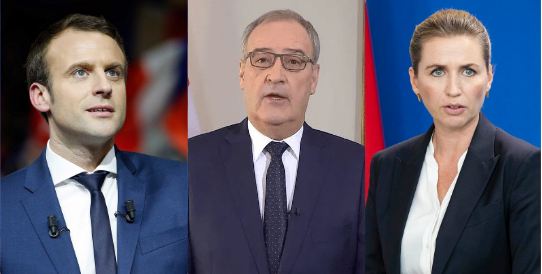 The Europe of the post-war era and after the formation of the European Union was a creation that forced out its identity and history for the sake of secularism. However, the mass immigration from the Middle East and North Africa has brought in many of the Islamic extremists who are still trapped in the Medieval era and thus, are trying to relive their Islamic expansionist fantasies.

One way or the other, almost all European nations with Christian majorities and part of the historic Christiandom realise that in order to survive they need to fight back against Islamism and Islamic extremism. Although the European countries have been taking actions here and there, the beheading of the French teacher Samuel Paty turned out to be a watershed moment. Now, be it Liberals or Conservatives, European nations have marked their target on Islamic extremism in order to survive.

The latest example of Denmark strengthens the case of Europe recognising the threat of Islamic extremism. The Parliament of Denmark has approved a new law that bans foreign countries from funding and financing mosques in the country. This step comes after reports of Muslim countries like Algeria, Kuwait, Libya, Morocco, Saudi Arabia, Turkey, Qatar and UAE disbursing hundreds of millions of Euros to spread Islam in Europe.

Switzerland too has voted in favour of banning face coverings in public, including the burka or niqab worn by Muslim women, which can be considered a Swiss way of starting their actions against the Islamic extremists.

In the Netherlands, even though foreign funding was already under scrutiny, mosques will face further monitoring over “foreign influence,” and their finances will be under even heavier scrutiny, after a decision made by the Dutch parliament last month. The motion, put forward by MP Bente Becker from the leading VVD party, was overwhelmingly voted through. And the fact that it was supported by the whole spectrum of political parties, proves our point.

The country’s Social Democrat Immigration and Integration Minister Mattias Tesfaye labelled the law as an important step to curb Islamist extremism. The law states, “The purpose of the Act is to prevent natural and legal persons, including foreign state authorities and state-run organizations and companies, from working against or undermining democracy and fundamental freedoms and human rights by making donations.”

“Anyone who receives one or more donations that individually or together exceed DKK 10,000 (€1,350; $1,600) within 12 consecutive calendar months, from a natural or legal person who is included on the public ban list … is punishable by a fine,” it adds.

Now the options for political parties are aptly clear, as the people are no longer willing to lay low and be intimidated by the Left and its Secularism trope. Either address the problem of Islamic extremism or vanish from the political map – countries like Poland and Hungary facing the early onslaught of uncontrolled waves of immigrants from Turkey learnt their lessons and closed their doors.

However, countries that were wearing the cloak of secularism are now witnessing a political transition or are dealing with the issue with immediate effect. The Macron government came out with a new bill last month to deal a blow to Islamic fundamentalism. One of the provisions under the law will make it mandatory to send children to school from the age of three. The body, wordings and intent of the bill have so much to teach the world. It is for sure setting an example that other countries can emulate to deal with the radicalisation that extremist Islamists can indulge in.

Read more: Macron’s campaign to free France of radical Islam is a model for other countries to follow

While these countries have learnt their lessons and many others are contemplating on following the example of France, notwithstanding the political ideology that represents the nation, Sweden has turned out to be a left-wing exception that is still not willing to relent to its flawed logic.

In the past decade, the small European country has started burning itself from within – and the flames of radical Islamism now threaten the very fabric of Swedish society. Sweden has always been an open country, and its people have been more than welcoming towards those who wish to live alongside them. However, for the past ten years, particularly after the 2015 migrant crisis, the Swedish society has lived in fear of migrants who have entered the country from Syria, Somalia, Afghanistan, Iraq and other Muslim nations. Now, Sweden has become a prime example of why borders must never be opened to hordes of exclusivist people seeking to wage war against any person not subscribing to their theological ideologies.

Read more: Hardcore Islamism, rampant illegal immigration and much more – Sweden is a new hell in the making.

However, going ahead as the whole of Europe takes actions against the Islamist extremists, Sweden’s politicians will be forced to wake up in the face of all the chaos and ruination. And in the face of rising public anger, they too will be forced to address the issue with priority. Eventually, all European nations will come to terms with reality including the Nordic countries. They must protect their nation-state identities and enforce their border security to safeguard people and not let their citizens die and nations fail to save one flawed ideology.