Black lives matter but only in America, 500 black people were burnt to death in Yemen, but no one batted an eyelid 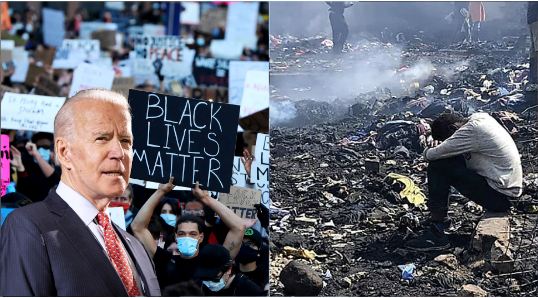 Black lives matter, but they matter only if you are in America. Yemen’s Houthi militia burned alive 500 African migrants. Surprisingly, or shall we say unsurprisingly no one cared about it. Not a statement was made nor any outrage was displayed. It is appalling to see that black lives only matter if it is the US. For the rest, it seems it is dog eat dog and the biggest upholder of human rights with its oh so-humane President Biden at the helm does not even care to bat an eyelid.

The Houthis were given the tag of terrorists by the Trump administration. Joe Biden had removed it in his first few days in the office. The champion of human rights and societal causes gave free rein to the rebels while at the same time blocked arms sale to Saudi Arabia. The Houthis have just massacred “500” African migrants and the champion President of the United States has not even issued a statement.

According to the Geneva-based SAM Organization for Rights and Liberties, which interviewed some survivors, the Houthi militia used force to end a strike by migrants protesting inhuman treatment, extortion, and poor conditions inside the facility.

“The Houthis were directly and consistently responsible for the killing and injury of approximately 450, mainly Ethiopian, migrants in a detention centre on 7 March 2021, in a fire triggered by bombs apparently fired by Houthi forces,” the study concluded, leaving no space for hyperbole by the usual suspects.

The findings have been backed up by several local independent organisations. Mwatana, a leading Yemeni human rights group, blamed the Houthis for the fire and accused them of unfairly detaining survivors and families of the victims to prevent them from speaking out about what happened.

“The Ansar Allah (Houthi) group caused the death and injury of scores of African migrants by starting a deadly fire in an overcrowded detention facility in Sanaa on March 7,” Mwatana said in a statement.

Separately, the Women Solidarity Network accused the Houthis of suppressing migrant demonstrations with live bullets and explosive devices and requested that the UN protect survivors. “We urge international organizations, including the United Nations, to provide protection to the migrants who have been hospitalized,” the group said.

According to Muammar Al-Eryani, the internationally recognised Yemeni government’s information minister, the Houthis have been harassing survivors and their families to sway their accounts to the media or any potential foreign investigation.

He said, “Our sources raised the alarm that the Houthis were promising migrants in hospitals the issuance of cards in return for their silence. As per information collected from witnesses, Houthis rounded up illegal African migrants, including children, from their homes to force them into recruitment as fighters to send them to conflict fronts.”

The massacre in Sanaa occurred at the same time as the city of Minneapolis in the United States decided to pay $27 million to settle a federal lawsuit over the death in police custody of a single black man, George Floyd, last year.

The Minneapolis City Council settlement, which is the country’s biggest pre-trial civil rights settlement, has been hailed as a strong statement that black lives matter and that police violence against people of colour must stop.

But in the case of Houthis massacring almost 500 black people, the reaction has been mute if not non-existential. Elaborating on this point, Al-Qahtani, the Yemen editor of Asharq Al-Awsat newspaper said, “International organizations are always careful when dealing with any issues in areas controlled by Houthis in order to achieve their humanitarian goals. Their reactions to the deadly incident in Sanaa are proof of that.

The Black Lives Matter movement ravaged the United States after George Floyd’s death in police custody. Protests after protests against the police departments and the government took place for multiple days, damaging businesses and government property worth billions of dollars. Former President Donald Trump was harshly criticised by Joe Biden and the now US Vice President Kamala Harris for Trump’s apparent lack of empathy for the protestors and the black minority.

But the absence of criticism on Sanaa massacre is proof enough that the so-called champions of human rights have been toeing their political lines. Why, because it is in their interest to do so. Silent spectators of a massacre make them as accountable as the Houthis.

Knowingly or unknowingly, Joe Biden has emerged as the best friend of the drug cartels and America will suffer because of that