Biden has been consulting Obama. That means Obamacare, Iran nuclear deal and war in Syria are just around the corner 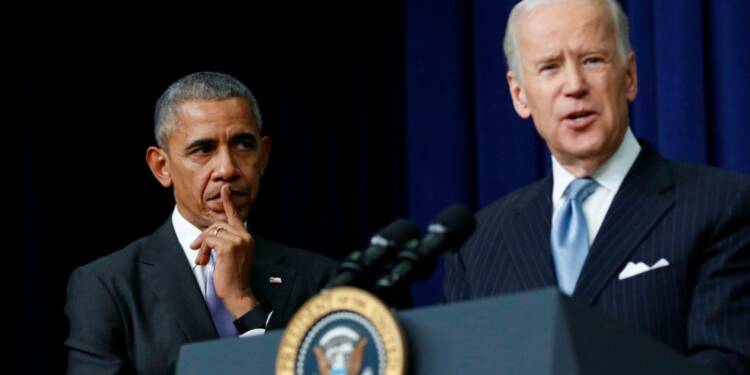 Joe Biden, the 46th President of the United States of America still believes that he is the subordinate of former President Barack Obama, as the septuagenarian continues to scurry back to Obama for advice on crucial policy decisions. White House Press Secretary Jen Psaki on Monday confirmed that President Biden maintains “regular” communication with Obama on a number of issues. Psaki declined to give an exact number of times that the duo had spoken, but said that they “keep in regular touch” and their respective teams were in touch “about a range of issues” as well.

While it is understandable that politicians who worked in close proximity for several years would like to share their ideas with each other but one cannot help but overlook the uncanny resemblance of Biden’s policies to that of Obama’s. Thus, it feels as if Obama is babysitting Biden and forcing his stale and old policies through the new President. From Syria to Obamacare/Medicare to Iran Nuclear deal, Biden has started trudging down the same path, charted by his vile predecessor.

Reported extensively by TFI, after being installed in the White House, Biden is itching to go back, sit across the table with Iran and quickly sign the Obama era’s Joint Comprehensive Plan of Action (JCPOA) or simply the Iran nuclear deal. Biden is so obsessed with the deal and removing Trump-era sanctions that even Tehran understands what it means to him. Therefore, Iran keeps demanding more and more relief from the US President, even though its nuclear programme is very much alive and kicking.

As for Syria, reported by TFI, exactly 36 days after becoming the US President, Joe Biden ordered strikes in the Middle Eastern country, giving an indication that just like his buddy Obama — Biden was vying for a ‘Nobel Peace Prize.’ Meanwhile, in Yemen, Biden has stopped arms sales to its allies Saudi Arabia, UAE and other countries while giving aids, supplies and lifting the restrictions on the Houthi rebels.

Read more: A giant smokescreen and a deal: The reality of the strikes on Syria that the world media has failed to decipher

While Trump signed Abraham accords and brought the Middle-East closer, more so than ever, President Biden has openly targeted the Saudi Crown Prince and has pushed the bilateral relations with Israel several years back by giving a continuous cold shoulder to Netanyahu.

While Obama’s ambitious and ‘yet-to-deliver-any-tangible-benefits’ Obamacare was a big dud, the left-leaning, socialist Democrats like Bernie Sanders and Pramila Jayapal are forcing Biden to implement the Medicare-for-all which, if implemented is certain to put a tremendous strain on the already fragile healthcare setup of the country.

During his campaign for the White House, Biden called for lowering the program’s eligibility age from 65 to 60. That would open the program to up to 23 million more enrollees. An analysis from a professor at Harvard estimates that could add up to $100 billion in additional costs each year to its balance sheet.

Due to the bill’s huge repercussion to the exchequer, a Medicare-for-all bill has never cleared a single committee, let alone Congress but the Democrats still seem hell-bent on pushing and ultimately bring it to fruition.

And lastly, the relationship dynamics between Biden and Obama is severely lopsided. Despite, the media claiming that both are thick as thieves, Obama continues to undercut Biden. Even during the latter’s campaigning trail, Obama waited up until the last moment to endorse him and even when he did, he had his reservations regarding Biden’s ability. The fact that Obama batted for Clinton in 2016 by sidestepping Biden, should tell you all you want to know about this symbiotic relationship where Obama is the frenzied parasite. And yet, a deluded Biden is hopelessly emulating Obama.

Joe Biden’s plan to ‘lift children out of poverty’ is going to run the US bankrupt. A truly nanny state with a collapsing economy