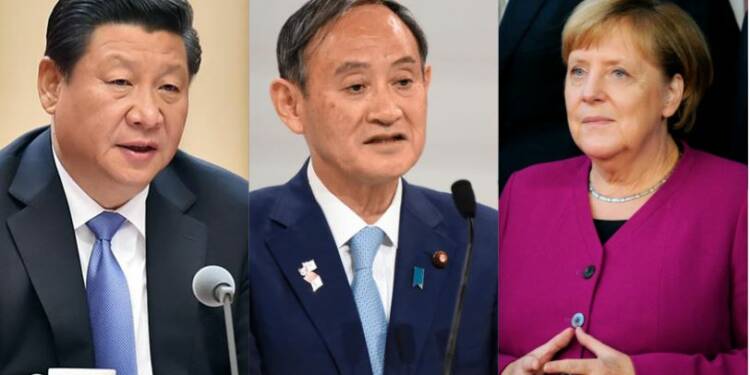 Japan and Germany signed an agreement on Monday to allow the sharing of sensitive information in order to improve defence cooperation. The agreement was signed at the Foreign Ministry in Tokyo by Foreign Minister Toshimitsu Motegi and Ina Lepel, the German ambassador to Japan, as Germany seeks to expand its presence in the Indo-Pacific region in the face of China’s rapid rise.

The European Union had signed an investment deal with China and Germany had vehemently pushed for the deal. It was being believed that the European Union will now certainly play to the Chinese tunes but it has turned out to be the opposite. The deal was made with many concessions from the Chinese side but almost none from EU. Now, the European countries hold a great leverage against China and are using it to push their interests in the international arena, specifically the Indo-Pacific.

The two countries had agreed to sign such a treaty, also to ensure the adequacy of their confidential details since February 2019, when Chancellor Angela Merkel was in Tokyo for talks with then Prime Minister Shinzo Abe.

Motegi said Japan welcomed the Indo-Pacific policy guidelines drawn up by Germany last year and the scheduled shipment to Japan by the ministry to the region. Germany stressed in the guidelines its aim to strengthen its commitment to Asia by emphasising its economic potential and the increasing power of China in the region.According to the Ministry, Japan also has similar intelligence-sharing agreements with the United States, Australia, Great Britain, France, India, Italy, and South Korea.

As China’s presence grows, Germany is paying more attention to the Indo-Pacific. Last year, Berlin drafted guidelines for diplomacy in the region, and a frigate is expected to be dispatched as early as this summer. In a virtual meeting with Japanese Defense Minister Nobuo Kishi last December, German Defense Minister Annegret Kramp-Karrenbauer said that Germany has a security interest in the area and plans to increase its presence there.

Berlin is considering sending German liaison officers to multilateral organisations, engaging in military drills, and undertaking port visits by navy units, she said. According to Kramp-Karrenbauer, the German government aims to strengthen cooperation with partners in the Indo-Pacific region through NATO.

In September last year, Germany revealed its Indo-Pacific strategy.  It was a realisation of how the strategic hotspot of the world is shifting from the Atlantic to the Indo-Pacific. At the time the German Foreign Ministry has itself stated, “As an internationally active trading nation and proponent of a rules-based international order, Germany – embedded in the European Union – has a great interest in participating in Asia’s growth dynamics and in being involved in shaping the Indo-Pacific region, as well as in upholding global norms in regional structures.”

Germany’s Indo-Pacific strategy itself alludes to how trading interests have guided its foreign policy. The strategy released by the German Foreign Ministry stated, “More than 90 per cent of the world’s foreign trade is conducted by sea, a large part of which via the Indian and Pacific Oceans.

Up to 25 per cent of the world’s maritime trade passes through the Strait of Malacca. More than 2000 ships per day transport goods between the Indian Ocean and the South China Sea via this bottleneck. A disruption to these maritime trade routes and thus to the supply chains to and from Europe would have serious consequences for the prosperity and supply of our population.” The Ministry had added.

Germany is also the biggest economy in the EU and thus de-facto leader. Moreover it is also a member of the G4 nations that also include Japan, India and Brazil. These four countries support one another’s bid for a permanent UN Security Council seat. Berlin’s Indo-Pacific strategy goes as far as cooperating with India and Japan for UNSC reforms to maintain a rules-based order in the Indo-Pacific.

Although China had signed massive investments deal with the EU, with Germany being the engine pushing the deal, it did so by making great concessions. On the other hand the EU made no such concessions. The deal seemed to be forced upon China, with the EU bending it over to get what it wants and Beijing pushed for the deal even though there were no reported concessions from the European Union.

Since the deal, the Eu under the leadership of Merkel and Macron has criticised China and its human right’s violations. Moreover, Germany’s Indo-Pacific push shows that Germany is using the deal as a way to punish China and increase its presence in the Indo-Pacific and the latest agreement with Japan is a signal of serious intent.