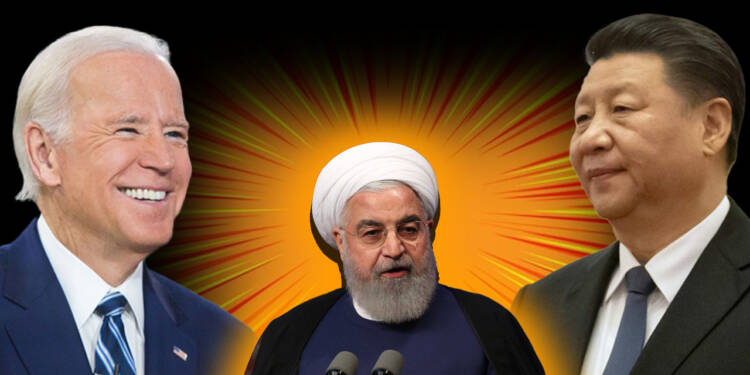 China and Iran have signed what is being called a historic and landmark 25-year long strategic deal, addressing economic issues amid crippling U.S. sanctions on Iran. The agreement, called the Comprehensive Strategic Partnership, covers a variety of economic activity from oil and mining to promoting industrial activity in Iran, as well as transportation and agricultural collaborations. The strategic and super-secretive deal also supports tourism and cultural exchanges between the two countries. TFI Media was among the very first publications to report on the said comprehensive agreement between Iran and China as early as September 2020.

China aims to make Iran a superpower in the Middle East. To that end, the ‘historic’ agreement signed between the paper dragon and the Shi’ite nation will propel Iran towards making economic progress, with the help of China, despite severe sanctions imposed on it. What’s worse, Iran is being aided by the Biden administration in the U.S. to grow beyond its present self. Of course, the economic sanctions have not been revoked, yet, Biden has made it amply clear that his administration is willing to go a long way in ensuring that the Iran Nuclear Deal is brought back to life.

However, it is most definitely not going to be easy for neither Joe Biden nor Xi Jinping to achieve their goals of making Iran a parallel powerhouse in the Middle East. Iran is the arch-nemesis of the Arab world, led by Saudi Arabia – which has a firm hold over the Islamic order in the world. Then, there is the Jewish nation of Israel, which is willing to go to any extent in order to save its sovereignty and integrity from being infringed upon by Iran. Iran and Saudi Arabia are locked in a proxy-war in Yemen, and China entering into a 25-year-long agreement with Tehran only exacerbates the worries of Saudi Arabia – of there being a concerted global effort to dethrone the kingdom as the hegemon of the Islamic world.

Read more: Iran has made a huge mistake – China all set to turn it into a China-controlled Surveillance state

The Iranians are calling their deal with China “deep, multi-layer and full-fledged.” In order to drive the rise of Iran as a force to be reckoned with, the agreement – major parts of which have not been shared in the public domain, is aimed at altering the geopolitical realities of the Middle East. It almost seems like China, U.S. and Iran are colluding with each other to undo all the good work done by the Trump administration in the war-torn region in the past four years.

Consider this – as Iran and China were working on the agreement, Joe Biden, soon after assuming the Presidency, put on hold the sale of F-35 fighter jets to the UAE, which were promised by his predecessor to the country for it signing the Abraham Accords. The Biden administration also paused the sale of precision-guided munitions to Saudi Arabia, in an overt effort to weaken the Arab world at a time when China is aiding Iran’s rise in the region.

The Biden administration also revoked the terror designation of Houthis, who have been incessantly attacking Saudi military and oil sites of late. Secretary of State Antony Blinken, while announcing the same, said, “I am revoking the designations of Ansarallah, sometimes referred to as the Houthis, as a Foreign Terrorist Organization (FTO) under the Immigration and Nationality Act and as a Specially Designated Global Terrorist (SDGT).” While Houthis attack Saudi assets and military installations, the U.S. is empowering the Iran-backed forces instead.

This will unify the Arab world like never before, to take on the challenge of a visible China-Iran-U.S. trilateral which is taking shape. The friendship between the Arabs and Israelis will further be strengthened, now that Iran’s growth is being aided by China. Already, Israel has made it known that the United States abandoning it to cosy up to Iran will have no bearing on the Jewish nation’s importance and geostrategic standing in the region. In fact, as explained by TFI earlier, Israel might just be on the cusp of sharing high-level intel about Iran and the Middle East with Moscow as it welcomed Russia’s role in the Middle East and its commitment to the safety of Israel.

In their endeavour to discount the Arab world and Israel to empower Iran alone in the Middle East, China and the Biden administration are inviting hell upon themselves. They must be ready to face the collective wrath of the Middle East for trying to alter the geopolitical realities of the region.