‘Do not work with the Chinese,’ Japan might close its doors for Chinese techies 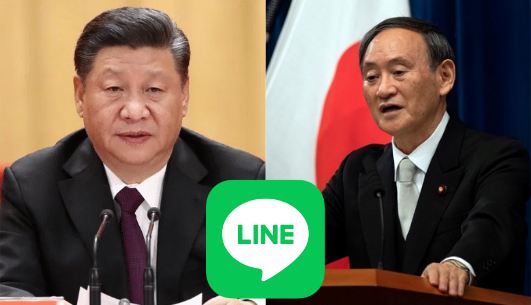 A development that comes as a stern message to all Japanese corporations around the country, the Yoshihide Suga government recently closed doors for popular messaging app ‘Line’, owned by SoftBank Corp’s Z Holdings after sensational news reports came out suggesting that the Chinese engineers of the company working in a remote location of Shanghai had compromised the details of its users after they were allowed access to the servers in Japan from 2018.

Local media reports stated that four engineers at a Line affiliate company in China, who perform system maintenance for Line, were allowed to access servers that contained the names, telephone numbers and e-mail addresses of users.

Chief Cabinet Secretary Katsunobu Kato announced that Line was temporarily halted and a task force was being set up to look into the matter. At a news conference, Kato said, “The government will halt the use of Line when handling sensitive information for now, and set up a task force swiftly, so that usage guidelines can be compiled soon.”

Internal Affairs and Communications Minister Ryota Takeda has ordered local administrations to stop collecting questionnaires and opinions, as well as providing services and receiving all types of applications from the population through this messenger.

The message is clear to the likes of Line that they risk being banned completely if they employ the services of Chinese techies, who for all potential reasons could be ‘United Front’ activists or spies, hiding in plain sight and trying to infiltrate the sensitive tech sector of Japan.

The ‘temporary ban’ also sets a precedent for other companies to follow who will now be more alert and scrupulous into hiring the Chinese. The greed of CCP to harvest the tech data of its enemies can now possibly lead to Japan disbarring the Chinese tech engineers or if the push comes to shove, not even allowing them entry inside the country. And this comes as a shocker to those ordinary Chinese folks who just wanted to make an honest living.

Japan’s antipathy and resentment towards China are understandable because in recent times the middle kingdom has done everything possible to rile up its otherwise docile neighbour. First, it was the COVID pandemic and the subsequent postponement of the marquee Tokyo Olympics that caused a severe dent in the bilateral relationship.

The country was keen on ensuring that the quadrennial multi-sports event goes as planned but China and its irresponsible handling of the deadly virus caused a full-blown pandemic which in turn crippled the entire planet and delayed the sporting mass-event.

Secondly, despite going through a change in guards at the top political brass with former Prime Minister Shinzo Abe stepping down due to illness, the new Prime Minister Yoshihide Suga has not let down the intensity against China and has battled with even more ferocity.

Tokyo is still standing its ground when it comes to the Senkaku Islands which China, claims to be its own and calls Diaoyu. Japan had purchased the Senkaku Islands from a private owner in the year 2012. Yet, Beijing keeps claiming the Japanese islands. Chinese vessels routinely intrude into Japanese waters and hover around the Senkaku Islands for several days on a trot. Suga knows that China doesn’t intend to give up on its expansionist ambitions.

Japan is taking some major anti-China decisions, at a time when the middle kingdom shows no signs of exercising restraint in the East China Sea. While Chinese President Xi Jinping keeps urging Japan’s Prime Minister Suga to repair Sino-Japanese ties, Chinese intrusions into Japanese waters have become a regular feature. As a result, Japan has forged friendships with several Southeast Asian countries and are in the process of pulling its companies out of China, thereby giving a jolt to the CCP.

Read more: ‘Pack up and get out of there,’ Japan to spend $2.2 billion to get Japanese companies to exit China

Japan has actively worked around the clock to jumpstart Quad and bring all its members on the table to form a concise policy against China and its expansionist plans in the Indo-Pacific. Despite Joe Biden, being hesitant to carry forward Trump’s legacy, it is Japan, India and Australia, that are currently carrying the Quad and putting constant pressure on Beijing, which otherwise would have gobbled up one country after another. Recently, Tokyo expressed its support for Taiwan and has also empowered the Philippines to take on Xi Jinping’s naval invasion in the South China Sea. Overall, Japan has been holding China accountable for its aggression by showcasing an unsparing attitude.

Effects of American surrender in Alaska: China is now dictating terms to Europe, US and Canada