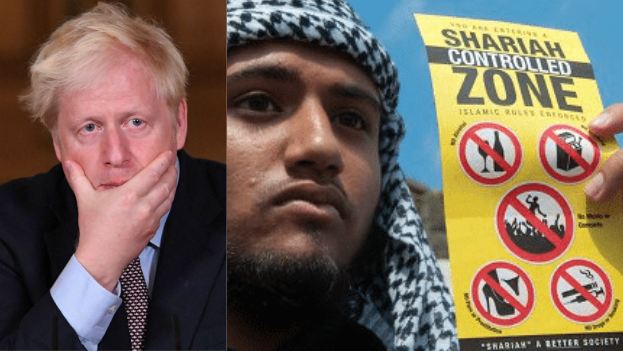 As western democracies keep on prioritising the Islamists getting offended rather than defending the cherished ideal of the right to free speech, a situation like Samuel Paty can arise again. While France has taken the most decisive and unapologetic step in dealing with the Islamists, a similar situation is taking shape in the United Kingdom. A teacher in the UK who showed pupils a cartoon of the Prophet Muhammad to educate students about racism and blasphemy has been suspended following huge protest by the Islamists and their sympathisers.

Now the teacher is suspended, without a job and is in a constant threat of being dealt with, as French teacher Samuel Paty was killed. The teacher’s father said, “He is worried that he and his family are all going to be killed. He knows that he’s not going to be able to return to work or live in Batley.” Now the ball is in the court of the conservative government led by Boris Johnson to save the teacher from any dire consequences, as threatened by the Islamists and thus, save the idea of free speech enshrined in the English common law.

After the beheading of Samuel Paty, France has been on the offensive to deliver a strong, rightful response against the radicalisation of Islam in France. Macron has risen to lead his people amidst heightening extremism and had called out radical Islamists for their radical approach which was against the French way of life, or the French Lucite. This had come in the backdrop of the increased activities of the Islamists who are stuck in the Middle ages and want to take over Europe and Christendom.

Read more: Macron’s campaign to free France of radical Islam is a model for other countries to follow

One way or the other, almost all European nations with Christian majorities and part of the historic Christendom realise that in order to survive they need to fight back against Islamism and Islamic extremism. Although the European countries have been taking actions here and there, the beheading of the French teacher Samuel Paty turned out to be a watershed moment. Now, be it Liberals or Conservatives, European nations have marked their target on Islamic extremism in order to survive.

Read more: Liberal or Conservative, European nations have marked their target on Islamic extremism in order to survive

The test which the Europeans were facing, has come to the British Islands too. In the face of the pressure mounted on the teacher by the Islamists, the family has become terrified. As per reports, the teacher and his family remain in hiding and have had to put a CCTV camera in their home. His dad said “He’s just a normal Yorkshire lad who loves his rugby and looks after his family. I’m very proud of him and it breaks my heart to see him so broken.”

He added, “Look what happened to the teacher in France who was killed for doing the same thing. Eventually, they will get my son and he knows this. His whole world has been turned upside down. He’s devastated and crushed.”

However, all hope is not lost and people are also coming in his support. More than 60,000 have signed a petition to reinstate the teacher at the Batley Grammar School in West Yorkshire, England, that was previously suspended for showing a cartoon of the Prophet Muhammad.

“The RS Teacher was trying to educate students about racism and blasphemy. He warned the students before showing the images and he had the intent to educate them. He does not deserve such large repercussions,” the petition’s creator, who identified themself as a student of the Batley Grammar School wrote in the description. “He is not racist and did not support the Islamophobic cartoons in any manner. This has got out of hand and due to this, students have missed out on lessons because of ‘peaceful’ protestors.”

After backing Taiwan and the Philippines, Japan is set to militarily back Indonesia against China as the US leaves a void