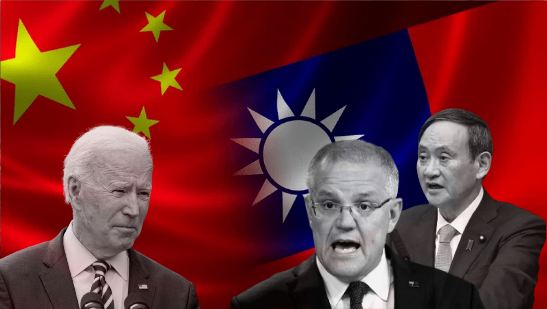 The Biden administration is playing a rather cunning game in the Indo-Pacific. On the issue of Taiwan, President Joe Biden is playing it safe and intending to put American allies on the forefront in the fight against China. In case of a Chinese invasion of Taiwan, Australia and Japan are being pushed by the Biden administration to be first responders of sorts. Earlier, as reported by TFIglobal, the Biden administration lured Japan into agreeing to prepare for all Taiwan-related exigencies, including a ‘joint’ military response to Chinese aggression against the democratic island nation. Now, Australia too is being roped in by the White House to sign up for a joint response to China if it decides to invade Taiwan.

Make no mistake, this is a very noble initiative. America and its allies must definitely put up a joint fight against China when the paper dragon invades Taiwan. However, it is a half-hearted and non-commital initiative on the part of the United States. Japan and Australia, by virtue of their proximity to Taiwan and due to fears of China one day even claiming rights over their territories, might very well put in a cent per cent effort to protect Taiwan. The Biden administration, however, as has been seen already, is rather enthusiastically sympathetic to the CCP’s cause.

The US embassy’s most senior diplomat currently posted to Australia, Michael Goldman has revealed that the United States and Australia are discussing contingency plans in case a military conflict erupts over Taiwan. Goldman said, “I think we’re committed as allies to working together, not only in making our militaries interoperable and functioning well together but also in strategic planning… And when you look at strategic planning, it covers the range of contingencies that you’ve mentioned, of which Taiwan is obviously an important component.”

Similarly, Japanese and US defence chiefs had agreed in their recent meeting in Tokyo to closely cooperate in the event of a military clash between China and Taiwan. According to the sources, when US Defense Secretary Lloyd Austin met with Japanese Defense Minister Nobuo Kishi on Tuesday, he brought up the issue, though there was no debate about how their countries might coordinate their response to such an emergency.

Although the Biden administration is pretending to be ramping global support for the Taiwan cause, not many are convinced with the cosmetic steps being taken. It is believed that Joe Biden is putting American allies like Australia and Japan on the forefront when it comes to defending Taiwan against China, while himself not growing the spine to declare American support explicitly for Taiwan if the paper dragon decides to invade it. While Australia and Japan are being readied for taking on China, the US is bound by no law or treaty mandating it to defend Taiwan in case of a conflict in the region.

That makes the US, under an old and rather subservient President Joe Biden, an unenthusiastic party to the much touted “joint efforts” of defending Taiwan. The United States had, during the Jimmy Carter administration in 1979, annulled the mutual defence treaty with Taiwan, which mandated US intervention in case China invaded the island nation. This was done to placate the Peoples Republic of China and establish diplomatic ties with the mainland. The sacrificial lamb in this case turned out to be official US-Taiwan relations.

Currently, the US is not obligated to protect Taiwan against China by law. Australia and Japan are noble nations, but they must not make the mistake of blindly falling into Biden’s trap. Instead, for any joint alliance to fructify with the aim of defending Taiwan’s sovereignty, Japan and Australia must demand that the Biden administration pass a law which mandates the United States, irrespective of the administrations governing it, to protect Taiwan at all costs. This must be the departure point for any negotiation between Japan, Australia and the US regarding the joint protection of Taiwan.

Alexandria Ocasio-Cortez: The dumbest Democrat and the most underperforming Congresswoman