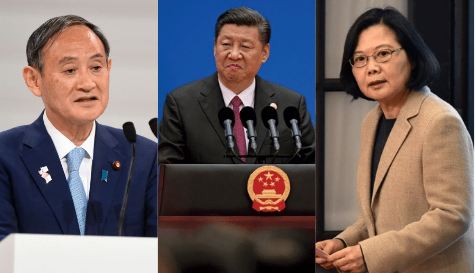 Although Joe Biden and his administration tried to change course vis a vis US foreign policy in the Indo-Pacific, it was the unrelenting and consistent pressure from Japan and other fellow Quad members which forced Biden to toe the Trump’s policy. Now, with the Chinese Communist Party in no mood to ease the tensions, Japan has decided to go an extra mile and prepare for any exigencies.

Japanese and US defence chiefs have agreed in their recent meeting in Tokyo to closely cooperate in the event of a military clash between China and Taiwan, Japanese government sources said Saturday. Given the continued non-compliance of China to recognize and respect the Japanese sovereign territories and waters, Japan no longer seems in the mood to stay on the defensive. China is now facing a bold and confident Japan, which will not only safeguard itself aggressively but will check any aggressive overreach by the CCP, even in the case of Taiwan.

According to the sources, when US Defense Secretary Lloyd Austin met with Japanese Defense Minister Nobuo Kishi on Tuesday, he brought up the issue, though there was no debate about how their countries might coordinate their response to such an emergency. These measures come at a time when Japan had reinterpreted its coast guard laws and stated that now the coast guards can shoot at foreign vessels.

Taiwan too claims the Senkaku islands but Japan is keeping its differences with Taiwan aside and it should scare Xi Jinping. Keeping the larger Indo-Pacific strategy in mind, Prime Minister Suga has warmed up to Taiwan as the island nation continues to face Chinese aggression, the worse being in the form of airspace violations by Chinese warplanes, keeping Taiwan’s defence forces on their toes constantly.

In January, Chinese President Xi Jinping gave a free hand to the Chinese Coast Guard to open fire at foreign vessels even in disputed waters which China claims to under its “jurisdiction”. The decision is apparently aimed at Japan’s Senkaku Islands, which Beijing claims and calls them Diaoyu. And thus, there is a remarkable spike in Sino-Japanese tensions. And the Japanese actions as mentioned above were retaliation to these developments.

The tensions between China-Japan as well as China-Taiwan are on a rise. In such a scenario, Taiwan too is taking actions to maintain the deterrence capacity and remove any internal loopholes. Recently, acting on a tip-off, a task force comprising New Taipei prosecutors and investigators raided seven locations, including the offices of WiseCore Technology Co., Ltd. and IC Link Ltd., in New Taipei and Hsinchu, the New Taipei Prosecutors Office said in a statement. It summoned 19 people for questioning over allegations of poaching talent from local hi-tech companies.

Read more: Taiwan begins a brutal crackdown on China-funded companies operating on its own soil

The ever-present threat of a Chinese attempt to take over the island has become more pronounced. In a recent statement, Chinese Premier Li Keqiang repeated the age-old stale threat to focus on the “reunification” of China as the ultimate goal. The Premier was speaking at the opening of the annual meeting of China’s parliament.

In such a situation, a clear stand by Japan that in case of any Chinese adventurism vis a vis Taiwan, Tokyo will provide a full-on military as well as all other kinds of support to Taiwan goes a long way.

They said Kishi mentioned a recent increase in the number of Chinese warplanes crossing the Taiwan Strait’s median line and the need to research ways for the Japanese Self-Defense Troops to collaborate with US forces defending Taiwan in the event of Chinese aggression in an earlier meeting with Austin.

As per an Asia Nikkei report, Tokyo has been reviewing the feasibility of issuing an SDF dispatch order to protect U.S. warships and military planes in case of a crisis between China and Taiwan given the strait’s geographical proximity and the possibility of an armed conflict there affecting the safety of Japanese citizens.