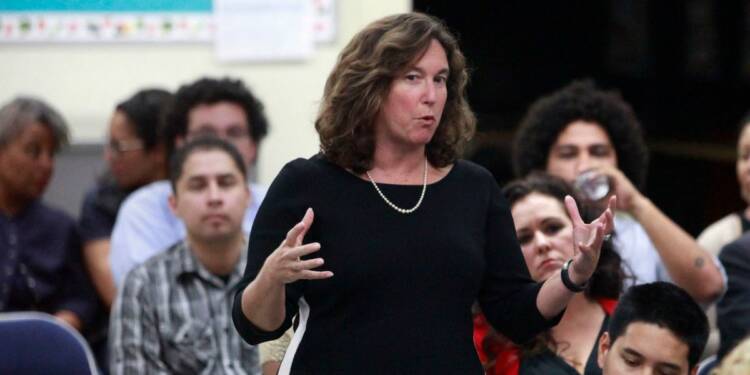 Biden administration does not care about the kids. Cindy Marten, US President Biden’s nominee for Deputy Secretary of Education, has stated that sexual harassment on school grounds is not always a serious problem. Furthermore, it is being suggested that educators have no moral obligation to disclose sexual harassment.

The San Diego Unified School District became known for sweeping sexual harassment cases under the rug under Marten’s leadership. Michael Gurrieri, a former school district investigator who alleged he was fired for refusing to self-censor additional claims of sexual harassment in a study on an incident between two kindergarten students at Green Elementary School, received a $375,000 settlement in 2019. The alleged victim’s parents argued that the school board delayed their investigation and that the principal allowed the alleged attacker to remain in their child’s classroom.

When a lawyer asked Marten about the incident, she said, “It depends (on) the individuals and the circumstances. Are other disabilities involved? Are there other things? What—I need to know all of the facts before I would determine the seriousness of it.”

Sexual assault in schools is not serious enough in itself. Cindy needs more grievous circumstances and perhaps a disability to believe that the sexual assault case needs to be responded to.

The lawyer also asked Marten whether such incidents should be reported to the authorities. She said “of course,” because “we’re mandated reporters as educators.” The lawyer then pressed Marten about whether there might be any other reason besides the strict letter of the law to report sexual abuse. To which she said “NO”

Lawyer: Okay. I’m asking if there’s any other reasons besides it being mandated.

This was hardly a private discussion. An organisation called Kids First submitted this deposition to ABC, NBC, CBS, and CNN months ago. It’s almost impossible that the mass media, let alone national education beat reporters at the New York Times and Washington Post, would have overlooked Marten’s story if she were a Republican.

The deposition was also sent to Kamala Harris’s Senate office, indicating that the Biden administration was well informed. However, they may have assumed—correctly, it turns out—that the mass media and education reporters would not dare to reveal a Democratic candidate.

She also has spent years of her career and time writing off concerns about sexual assault, violence and other problems in San Diego schools. Marten and other officials were accused of firing former investigator Michael Gurrieri in 2014 after he discovered that the “district was attempting to conceal sexual assaults on a local elementary school campus” to avoid the prosecution of the school’s principal for refusing to investigate the violations, according to another series of complaints filed in federal district court and San Diego Superior Court. Rather than finishing the inquiry, Marten wanted to retain the principal on staff until it was done, which other administrators accepted. Gurrieri was ultimately paid $375,000 by the district to resolve the lawsuit.

Democratic senators sang her praises during her confirmation hearing last week. It’s impossible to imagine any American parent looking at Marten’s comments on child sexual exploitation and concluding that she is morally eligible for the number-two spot in public education.

Although, she is not the only Biden nominee to have woke-radical ideas involving children. Biden’s pick for an influential role in the Senate Health, Education, Labour and Pensions (HELP) Committee also raised more concerns than subduing and calming the nerves especially during the time of a pandemic. Dr Rachel Levine, Biden’s pick for Assistant Secretary of Health at the Department of Health and Human Services has been a vocal proponent of imposing a radical gender ideology on the kids of the United States.

She has advocated for ‘sex-change’ for pre-pubertal people i.e., children. According to Levine, children ought to be given the latitude to choose their own gender. She has advised adults to “try not to force them one way or other” and instead to follow the child’s lead.

Both of these radicals have been nominated by Joe Biden. These nominees have radical ideas concerning children, and if they are passed by the nomination committee, Levine already has been passed; and they can adversely impact the lives of children.

Sexual assault is a heinous crime. Sexual assault on children is even more abhorrent, but to treat the issue as trivial is abominable. Sexual assault leaves a scar, an emotional and mental one, to be a child and to carry it with you while the perpetrator roams free is a burden that all children, who are victims of sexual assault in schools, will have to carry if Marten is passed by the committee. To not care about the issue is sinful and downright indecent of the Biden administration to nominate such a person with such revolting ideas. The Biden administration just does not care about Children.