If we go by the massive arms buildup, Arctic is about to turn into the biggest War Theatre in the coming years 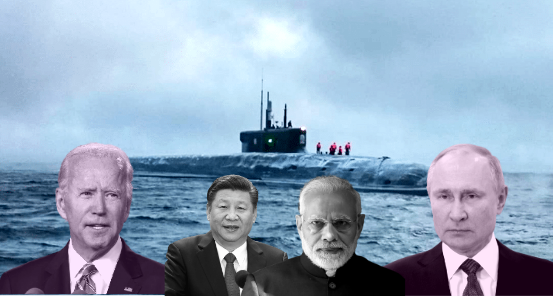 In order to protect its northern coast and open up a crucial shipping route from Asia to Europe, Russia is amassing unparalleled military might in the Arctic and testing its newest missiles in an area that has recently become ice-free due to the climate emergency. In response, NATO has matched Russia’s arms buildup with its own arms buildup in the region. The Arctic is heating up as the two bloc’s arms buildup reminisce of the days of the Cold War and it could turn into the biggest War Theatre in the coming years as other emerging powers also eye a piece of the region’s newly developing trade route.

Russia is one of the major powers in the arctic and has been cementing its position to secure the crucial shipping route that has been opening up with the ice in the region melting. The United States by virtue of Alaska is also an Arctic power and, through its North Atlantic Treaty Organisation, has been pushing to deter Russian influence in the Arctic. The shipping route opening up from Asia to Europe is a very promising and lucrative route. Emerging powers such as China and even India have signalled their intentions in the Arctic by either calling themselves a near-Arctic power or by working on an Arctic policy.

Arctic experts are particularly concerned with Russia’s unprecedented weapons buildup in the Arctic. Weapons experts and Western officials have expressed particular concern about the Poseidon 2M39 torpedo, a Russian’super-weapon.’ According to numerous reports in Russian state media, development of the torpedo is moving quickly, with Russian President Vladimir Putin demanding an update on a “primary point” of the tests from his defence minister Sergei Shoigu in February, and more tests expected this year.

This stealth torpedo is fuelled by a nuclear reactor and was designed by Russian engineers to get through coastal defences on the seafloor. The US Maxar, a space technology firm, provided CNN with satellite images that show a dramatic and continuous build-up of Russian military bases and equipment along the country’s Arctic coastline, as well as underground storage facilities for the Poseidon and other new high-tech weapons. In the High North, Russian hardware includes bombers and MiG31BM fighters, as well as new radar systems close to Alaska’s coast.

NATO and US troop have mirrored Russia’s build-up. B-1 Lancer bombers based in Norway’s Orland Air Base, for example, have recently performed missions in the eastern Barents Sea. In August last year, the US officials confirmed that the stealthy Seawolf submarine of the US military was in the region.

Read More: Japan has taken the sharpest anti-America turn yet by agreeing to help Putin in the Russian Far East and the Arctic

“There’s obviously a military threat from the Russians in the Arctic,” a senior State Department official told CNN, citing the refitting of old Cold War bases and the building of new installations on the Kola Peninsula near Murmansk. “This has consequences for the United States and its allies,” the official said, “not least because it provides the capacity to project power up to the North Atlantic.”

The Tsirkon and Poseidon are part of a new generation of weapons promised by Russian President Vladimir Putin in 2018 as strategic game-changers in a fast-changing world.

Despite the fact that US officials dismissed the latest arms as theoretically impossible and improbable at the time, they seem to be on the verge of becoming a reality. The Tsirkon, according to Norwegian Intelligence Chief Nils Andreas Stensønes, is a “modern technology with hypersonic speeds that makes it difficult to protect against.”

It is not just Russia and the US, China’s preposterous claim over Vladivostok is actually an attempt to flex muscles in the Arctic. China calls itself a “Near-Arctic State”, though it happens to be far away from the Arctic. The Chinese plan seems to be to stake claim over the Russian Far East that could take Beijing as far as the Bering Strait- a strategic chokepoint which is only 55 miles wide at its narrowest point and divides the Russian Far East from Alaska. It is the only marine route from the Pacific Ocean to the Arctic, making Alaska of incredible importance for China’s Arctic ambitions.

India has been investing in the Arctic region for years, and the Indian government recently unveiled a draught Arctic policy in order to protect its share of the pie that the region provides in terms of research and resources, such as minerals and hydrocarbons. It envisions India’s participation in climate science, environmental monitoring, maritime cooperation and energy protection in the Arctic region.

With so many players staking claims on the Arctic, Russia has already begun flexing its muscles. NATO and the US are close by and are matching Russia’s lead. This arms buildup could turn the Arctic into one of the biggest contentious issues of geopolitics. The region is going to turn into a major and a very lucrative resource hub in addition to a major trade route from Asia to Europe. Russia is the biggest power in the Arctic right now, but the US will never allow it to take unprecedented control of the region while India and China also are looking for a major way in the seductive Arctic pie.

China deceived Obama at Scarborough Shoal. Now, it is testing Biden with a scuffle and a smokescreen at Whitsun Reef