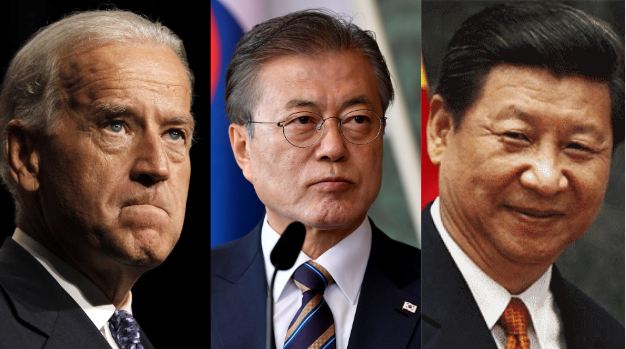 Joe Biden has abandoned allies left, tight and centre and the biggest beneficiary of this approach has been China. Joe Biden’s foreign policy has been the worst thing that has happened to the USA, which otherwise had the most well thought out geopolitical approach. Because of such policy paralysis, the USA is losing its allies. It was just recently that, South Korea’s foreign minister said that he expects China to play a role in peacemaking between South Korea and North Korea, inviting China’s president to visit Seoul.

Now, South Korea has to even go to the extent of agreeing to the terms set by Iran, given it is an ally of China. A South Korean oil tanker held for months by Iran amid a dispute over billions of dollars held in Seoul was freed and sailed away early on Friday, just hours ahead of further talks between Tehran and world powers over its tattered nuclear deal.

The seizure was widely seen as an attempt to pressure Seoul to release billions of dollars in Iranian assets tied up in South Korean banks amid heavy American sanctions on Iran. And the fact that the ship has been set free means South Korea has agreed to the terms set by Iran. This is something that could not have been possible under the Trump administration, but as Joe Biden has handed over South Korea to China, Seoul has no option but to agree to the demand of China and its allies, including Iran.

The USA has been losing allies at godspeed, and to make things worse, China is actively making the most out of it. If the foreign policy debacle in the Middle East was not enough, the Biden administration’s inability to keep the flock together has led to South Korea almost ending up in China’s lap. Seoul has been pushing the USA to follow on Trump-era North Korea policy, however, it is falling on deaf ears.

The point to be noted here is that South Korea, frustrated with the inaction by the Biden administration, has become more welcoming of China. Chung Eui-Yong was quoted as saying by South Korean news agency Yonhap, “South Korea and China share a common goal toward complete denuclearisation of the Korean Peninsula and toward permanent peacemaking policies.”

Read more: Biden has almost dropped South Korea into China’s lap and if the US doesn’t act, China will control the entire peninsula

South Korea’s Foreign Ministry said Iran released the tanker and its captain after seizing the vessel in January. The ministry says the Hankuk Chemi left an Iranian port at around 6 a.m. local time after completing an administrative process. MarineTraffic.com data showed the MT Hankuk Chemi leaving Bandar Abbas in the early morning hours.

By relenting to the Iranian demands, South Korea seems to have started considering China’s suggestions seriously. This further proves that South Korea is now doing as Iran says because Biden has left Seoul at the mercy of Iran’s ally China.