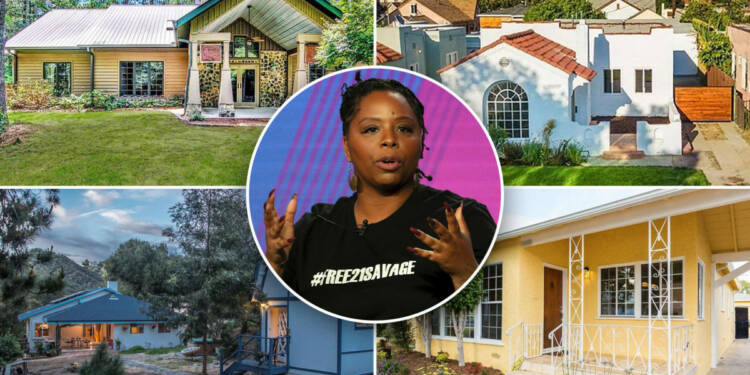 Patrisse Khan-Cullors, the leader of the Black Lives Matter (BLM) movement is a self-proclaimed Marxist. As a Marxist, you would expect the social activist to be leading a normal, average and middle-income life. But wait, it’s the Black Lives Matter movement that we’re talking about here. BLM is flush with cash. It’s sources of income are so complex and so tedious to unravel that normal individuals would rather not get their hands on the decentralised organisation’s books. BLM, which spread anarchy across the United States last year under the garb of protests, has now been exposed for what it really is.

BLM is a scam, which is duping donors only for its leaders like Patrisse Khan-Cullors to land themselves expensive, elite properties in Los Angeles. You read that right! Patrisse Khan has just purchased a $1.4 million home in an exclusive Los Angeles neighbourhood where the vast majority of residents are White. Do you want to know how White Patrisse’s new neighbourhood is? Well, it has over 88 per cent Whites living there!

Black Lives Matter, which began as a hashtag in response to the acquittal of George Zimmerman in the 2012 shooting of Trayvon Martin, took in more than $90 million last year. Now, its leader has just purchased a home with a three-bedroom and two-bath main house and a separate one-bed/one-bath apartment capable of hosting guests over a long term with a private entry and a living room with kitchenette. Interior spaces feature bamboo floors and, in the spacious open-plan living room, dining area and kitchen, vaulted ceilings clad in knotty pine. A whitewashed raised hearth brick fireplace anchors the living room and numerous skylights baths the cavernous space with natural light, according to Dirt.

The new property purchased by the BLM leader goes against all of her supposed beliefs. To begin with, her neighbourhood is not diverse enough. Black representation therein would perhaps be close to nil. And then, as a Marxist, the house, the bourgeoise-neighbourhood and the stench of wealth should have all made the $1.4 million purchase a non-starter for Khan. Yet, here she is now, having flouted all her ideological beliefs only to walk on bamboo floors and surrounded by entitled White people who continue to oppress her community. But she’s comfortable with it all, as long as the Malibu beaches remain a 15-minute drive from her new house.

The developments serves as a reminder of how the BLM ‘movement’ is replete with individuals like Patrisse Khan, willing to dupe innocent Americans only to grow richer themselves. It would be interesting to see if the BLM leader continues calling herself a ‘victim’ of ‘systemic racism’ and how the capitalists continue exploiting their employees. Now wouldn’t that be ironical?