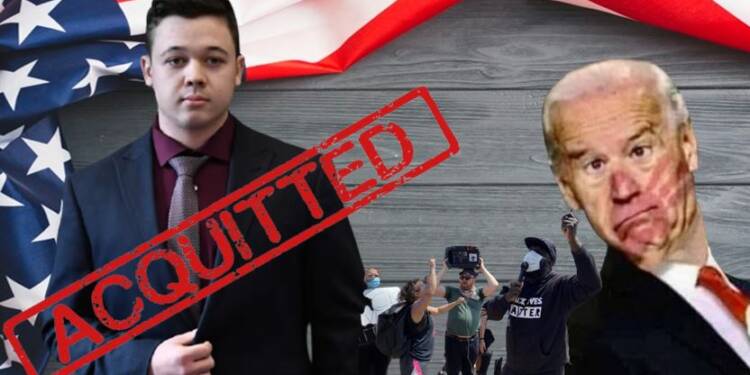 Broken down in tears and collapsed in his seat, Kyle Rittenhouse seemed to have lost his senses while the not-guilty verdict was being read out in the court. The 18-year-old defendant was acquitted Friday on all charges in the shootings that killed two men and injured a third during last year’s violence in Kenosha, Wisconsin.

Rittenhouse had been facing life in prison if found guilty on the most serious charge of first-degree intentional homicide. In the incidents involving murders of Joseph Rosenbaum (36), and Anthony Huber (26), as well as the injuring of Gaige Grosskreutz (27), on August 25, 2020, Rittenhouse was charged with homicide, attempted homicide, and reckless endangerment.

While the verdict came as music to the ears of patriot Americans, the same left other Americans red-faced and unnerved. Even President Joe Biden could not betray his anger while issuing a statement on Kyle’s acquittal that read, “While the verdict in Kenosha will leave many Americans feeling angry and concerned, myself included, we must acknowledge that the jury has spoken.”

Also read: George Floyd was a hoodlum who was killed and got famous. What legacy is the BLM talking about?

Make no mistake, immediately after the last year’s shooting incident involving the 17-year-old teenager, Biden had tweeted a video referring to him as “White Supremacist.” On November 19, 2021, when Biden was asked about the verdict, he stated, “I stand by what the jury has concluded.”

Timeline of the events:

It all started with the killing of an African-American man, Jacob Blake, who was shot seven times from behind by a Kenosha police officer on August 23, 2020. His killing prompted massive “Black Lives Matter” protests across Wisconsin, including violent demonstrations and riots that stirred vehement instability in Kenosha.

The Kenosha protests included rallies, marches, property damage, arson, and clashes with the police. In most cases, the violent protesters would overwhelm the police and security officials, enabling them to demonstrate more violently, and inflicting heavy losses on the local businesses.

For instance, Car Source, an automotive business with three properties, had been badly damaged during the first two nights of the unrest. Car Source had suffered $1.5 million in arson damage the previous night. The massive losses made Car Source approach various self-defence groups, of which Kyle Rittenhouse was a part of, to secure its properties from the violent protestors.

Also read: She bought a lavish mansion, then did massive corruption and now she is jobless – The story of BLM Co-Founder

In several videos recorded hours before the fatal incident took place, Rittenhouse was seen talking to police officers, getting interviewed, and helping the injured persons using the medical kit he had in his possession, along with a semi-automatic[5] AR-15 style rifle.

When a reporter had asked Rittenhouse why he was at the car dealership, he had responded by saying that “People are getting injured, and our job is to protect this business. Part of my job is also to help people. If there is somebody hurt, I’m running into harm’s way. That’s why I have my rifle, because I have to protect myself, obviously. I also have my med kit.”

The first confrontation between Rittenhouse and the truculent protesters took place at 11:48 PM, which was also witnessed by a reporter for the Daily Caller, Richie McGinniss. In McGinniss’ words, “Rosenbaum (his first victim whom he had shot dead) and other protesters were moving toward Rittenhouse, who was trying to evade them; Rosenbaum tried to engage Rittenhouse, who avoided this by sidestepping and running away.” It was then when he fired three shots at Rosenbaum, killing him on the spot.

The second confrontation came close on the heels of the first one. Amid the cacophony of police sirens and yelling crowds, a seemingly mad drove of rioters ran after Rittenhouse’s life. The 17-year-old boy tripped and fell to the ground. One of the men in pursuit jump kicked Rittenhouse while he was still on the ground. Rittenhouse fired twice, but missed the man.

Meanwhile, according to court records and video footage, another protester, Anthony Huber, made contact with Rittenhouse’s left shoulder with a skateboard as the pair struggled for control of the gun. And while Huber was pulling the gun from Rittenhouse, the now-acquitted guy pulled the trigger in self-defence, resulting in his immediate death.

The incident invited mixed reactions from the American people, with some seeing him as a proud patriot and others calling him a “white supremacist.” In August 2020, immediately after the shooting, then-President Donald Trump said, “He was trying to get away from them, I guess, it looks like,” noting the incident was under investigation. “I guess he was in very big trouble. He probably would have been killed.”

However, the left establishment and liberal media did not spare efforts in demonizing Kyle and rallying public support for the rioters. For instance, Facebook, Twitter and GoFundMe removed content supporting Rittenhouse, citing rules banning praise or support of mass shooters or glorification of violence. Facebook further disabled searches for “Kyle Rittenhouse” on its website, with a spokesperson saying “We’ve designated this shooting as a mass murder and have removed the shooter’s accounts from Facebook and Instagram”

Also read: After sending Derek Chauvin behind bars for unintentional homicide, BLM, Antifa and their Democrat friends are going after the Judge and Chief Medical Examiner

In its brazen attempt to whitewash heinous crimes committed by violent protesters during the night of the fatal shooting, New York Times even refused to publish a story accounting for the mind-boggling losses that those BLM protesters had inflicted on the business owners.

Personally involved in major story about China. US publisher had been involved in story for months confirmed everything suddenly said: we won't publish this story before election. "It confirms Trump narratives about China." Journos don't care about truth. That's a lie they repeat https://t.co/dehgBNeEcH

And now when the verdict is out and Kyle stands vindicated, the left cabal is now after the jury and the judge who oversaw Kyle’s prosecution and trial. Demonstrators outside the Kenosha, Wisconsin, courthouse lashed out with anger shortly after the teen’s acquittal, calling the judgment a shameful racial double standard. “If [Rittenhouse] was black, he would have been f–king executed on the street,” said a protester, who identified himself as Brandon. “If he was black, he would have been dead or in jail.”

Lou Shapiro, a state and federal criminal defence attorney in Los Angeles, said the prosecution “overshot” their case when they presented the argument that Rittenhouse “brought a gun to a fistfight.” They oversold the case so much that it eventually backfired, resulting in his acquittal.

The verdict is a tight slap on the face of all democrats and leftists who tried to frame Kyle with the charges of homicide, attempted homicide, and reckless endangerment. Justice has won, and expectedly, Americans should brace for an imminent turmoil, which is highly likely to be sparked by the angry leftist mob, whining wildly at Kyle’s acquittal.

Duterte’s “Marcos” ploy to confuse the Filipinos, appease China and stay in power