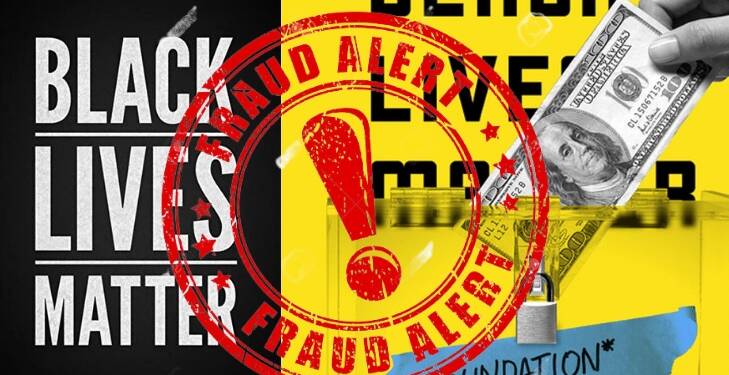 Earlier last year, the ‘Black Lives Matter’ movement suffered a huge setback when its co-founder and executive director, Patrisse Khan-Cullors, announced her abrupt departure. The BLM Global Network provided no explanation for the move, but it is believed that her actions were becoming increasingly discordant with the movement’s purported beliefs.

The Daily caller news foundation reported that she had used her position as the charity’s leader to funnel business to an art company led by the father of her only child. Experts believe the move by Patrisse Khan-Cullors amounted to “self-dealing” that raises serious ethical and legal questions.

While one would think that the BLM may have learnt its lessons, this was not the end of its corrupt practices. BLM’s national arm shut down all its online fundraising platforms on Feb. 2, just days after the California Department of Justice threatened to hold the organisation accountable for its “lack of financial transparency,” which includes at least $60 million in undisclosed donations.

The BLM was recently prohibited from collecting donations by California and Washington states owing to transparency concerns, but it disobeyed the restrictions, according to the Washington Examiner. I mean, why would they comply with the government, at a time when they are minting millions.

Since BLM co-founder Patrisse Cullors quit in May 2021, the news organisation discovered that the nonprofit appeared to have no known leader in charge of its $60 million funds. For nearly six years, Cullors had led the Black Lives Matter Global Network Foundation (BLMGNF), the legal organisation that represents the national BLM movement.

As per reports, California’s Department of Justice issued a formal delinquency notice to the group on Monday. “The organization BLACK LIVES MATTER GLOBAL NETWORK FOUNDATION, INC. is delinquent with The Registry of Charitable Trusts for failing to submit a required annual report(s),” a letter from the state’s Attorney General Rob Bonta said.

Indiana Attorney General Todd Rokita labelled Black Lives Matter as a “falling house of cards” and compared it to an “illegal enterprise” shortly before the movement turned down its online fundraising streams. “It appears that the house of cards is crumbling, as it does with practically every scam, plan, or unlawful enterprise,” Republican Rokita told the Washington Examiner.

According to the same article, it’s unclear whether Rokita’s office is investigating BLM, but Rokita told the news source that BLM’s undisclosed funding “definitely cause us to be concerned.”

Black Lives Matter began as a hashtag in response to the acquittal of George Zimmerman in the 2012 shooting of Trayvon Martin. Cullors, along with BLM co-founders Alicia Garza and Opal Tometi, pledged then to build a decentralised movement governed by the consensus of a members’ collective. In 2015, a network of chapters was formed, while donations and support poured in.

Read more: She bought a lavish mansion, then did massive corruption and now she is jobless – The story of BLM Co-Founder

The movement announced it took in just more than $90 Million last year following the death of George Floyd, which sparked riots and violent protests across the United States. The foundation said it ended 2020 with a balance of more than $60m, after spending nearly a quarter of its assets on operating expenses. However, Critics have timely expressed their discontent over the organisation’s vague policies of offering support to the black victims of police encounters.

While earlier it was considered that the ouster of Cullors and the likes of her is what BLM needs the most, but going by the recent developments it seems the whole organisation needs an overhaul.