Jail for violent protestors: Governor DeSantis has closed Florida for Minnesota like mayhem 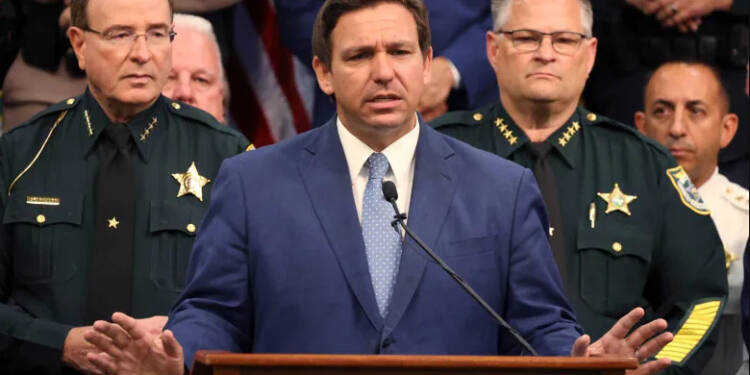 The Democrat-led USA is turning its back on the very basic stabilizers of the Democracy, and the Republican Governors are not ready to sit ideally by while Joe Biden and his courtiers rip apart the nation as we know it. The US government, Judiciary and other institutions have turned a blind eye on the events unfolding in Minnesota and as the mayhem runs rampant, police are left alone and are unwilling to take any action to bring order. At such a moment Florida Governor DeSantis has brought a new law which will make it impossible for Minnesota like mayhem to ever engulf Florida.

Florida’s governor has signed a law that he called the “strongest anti-rioting, pro-law enforcement measure in the country.” The law was written in response to protests around the country following the death of George Floyd at the hands of the Minneapolis police. It provides new protections for police and increases penalties for people who take part in property damage or violence during protests. It is in exact contrast to the way in which the Democrat states and the US government are handling and treating the Police force.

Following Floyd’s death last summer, Florida saw none of the violence seen elsewhere in the world. Gov. Ron DeSantis, on the other hand, said stricter laws are required to prevent demonstrations like those seen in Minneapolis, Portland, Oregon and other cities. “If you riot, if you rob, if you hurt anyone, especially if you harm a law enforcement officer during one of these violent gatherings, you’re going to jail,” DeSantis said at the bill signing on Monday. This adds to the exemplary leadership that the Governor of Florida is providing and, in a major way, it is showing a mirror to the Democrat Governors and even the Biden administration.

Florida Governor Ron DeSantis is showing exactly why the Democrats and their friends in the media love to hate him. He is capable, successful and has a lot of backers/ donors. The Democrats and the mainstream media see a big threat in DeSantis and, therefore, they have decided to demonise him. They see him as Trump’s heir apparent and someone who can sweep the 2024 polls if he decides to run for President.

Read more: Florida Governor DeSantis is capable, successful and has a lot of backers and that’s why Democrats and media demonise him

Over the recent past, DeSantis has been in the news time and again. And as such, DeSantis’ has managed to rise above a smear campaign run by his opponents. Presently, the charismatic Florida Governor is in news for presiding over a successful battle against the COVID-19 Pandemic and also managing healthy support from GOP donors.

The law makes local officials in Florida liable for lawsuits from injured parties if they are found to have not done enough to respond to control violent protests. And it reacts to the “defund the police” movement, allowing officials to appeal to the governor and his Cabinet regarding any decision by local officials to reduce funding to law enforcement.

Protesters who block roads or deface national monuments will face harsher punishments under the new legislation. It establishes a new crime known as “gang intimidation.” It also mandates that anyone detained at a rally be refused bail before their first court appearance, which would almost certainly result in overnight detention. All these parts of the law are enablers to the police force of the state of Florida and make sure that officers are confident in dealing with the rioters and are not scared for their own life. It also makes sure that the neo-leftists do not run amok the streets of Florida and create a mess out of the beautiful state.