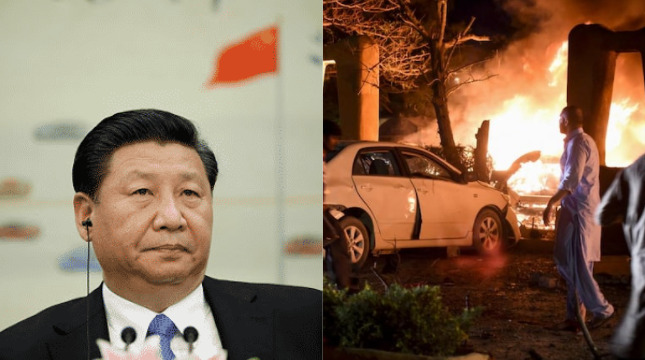 A bomb blast in Pakistan-occupied Balochistan’s Quetta has claimed five casualties- four human lives and one big geopolitical dream. A powerful explosion in the form of a suicide attack struck the parking lot of Serena Hotel in Quetta. Tehreek-e-Taliban Pakistan (TTP) has claimed responsibility for the blast. Four people died in the attack, and an eminent personality- China’s Ambassador to Pakistan may have missed the blast by perhaps just minutes.

China’s Ambassador may have missed the attack. But the blast has shattered the Communist nation and its dream to bypass the Malacca Strait through Pakistan to enter into the Arabian Sea. The blast has reignited many threats against China Pakistan Economic Corridor (CPEC)- a part of Xi Jinping’s flagship Belt and Road Initiative (BRI). The CPEC now gets complicated in a broad range of security threats like Baloch separatists, Sindhi separatists and even Islamist terrorists inside Pakistani territory.

At the outset, we need to clarify that the CPEC is an extremely crucial project for China and the foundation of Sino-Pakistan ties. Presently, much of the Chinese trade with the Gulf, Europe and Americas takes place via the Strait of Malacca.

The Strait of Malacca is a narrow stretch of water dividing the Indian and Pacific Oceans. India’s geographical position is such that in an event of a Sino-India conflict, New Delhi can put a blockade on China’s trade through Malacca Strait and put an irreparable strain on its economy.

In order to manage the Malacca threat, China proposed the CPEC- a BRI project running from Xinjiang in China to Balochistan in Pakistan. A port has been proposed at Gwadar as a part of the project, which is allowed to let China access the Arabian Sea without having to go through the Malacca Strait. Also, the Gwadar port advanced ‘String of Pearls’, a Chinese strategy to encircle India in the Indian Ocean Region (IOR).

China has thrown lots of money into the CPEC. It is worth $62 Billion and, therefore, Beijing remains quite sensitive about its investments in the project. But there are different forms of challenges that China faces. One major issue is, of course, the widespread corruption in Pakistan that does not allow the CPEC to move quickly. However, this is Pakistan’s internal issue, and there are bigger problems for China to face.

China’s Consulate in Karachi was attacked in 2018. A year later, gunmen stormed a luxury hotel overlooking the Gwadar port which is being built by China. In June 2020, the Pakistani stock exchange at Karachi, which is partly owned by Chinese companies, was attacked by Baloch insurgents. The Balochistan Liberation Army (BLA) claimed the responsibility for all these attacks.

Last year, Balochi and Sindhi pro-freedom organisations stitched an alliance to fight the CPEC project. Baloch Khan, the spokesperson for Baloch Raji Ajoi Sangar (BRAS), had then said, “Sindh and Balochistan are equally affected by the expansionist and oppressive resolves of China. Through the China Pakistan Economic Corridor (CPEC), China aims to subjugate Sindh and Balochistan and occupy the coasts and resources from Badin to Gwadar.”

But with the latest attack in Quetta, China would have realised that Balochs and Sindhis are not the only threats in Pakistan. A new threat is also emerging in the form of TTP. The Taliban active in Pakistan is structurally different from the one in Afghanistan, but it professes a similar ideology. Beijing, however, remains concerned about the Talibani ideology in any of its forms.

Read More: Reasons why Russia is warming up to Chinese client state Pakistan and how it can upset Indo-Russia ties

Just like the Afghan Taliban, TTP is also very active along the Pakistan-Afghanistan border belt. It is particularly active in the Pashtun-dominated Balochistan, where the CPEC is also under construction. China has, therefore, always tried to forge good relations with the Afghan Taliban and it has often pressed the Pakistani intelligence into service for this purpose.

Also, both the Afghan Taliban and TTP do not recognise the Durand Line, which is the effective Pakistan-Afghanistan border. They are indeed very vocal about an independent Pashtun state in the region.

So again, China finds two big challenges in way of its Arabian Sea dream- firstly, the Taliban support for a Pashtun state which could easily militate geopolitically with the CPEC.

And secondly, the clear security threat in TTP. After all, the TTP is a hardcore Islamist-terror organisation that could harbour some level of resentment about Chinese persecution against Uyghur Muslims in Xinjiang. Also, the TTP is at odds with the Pakistani State and China does not have the option of communicating with TTP through Pakistani intelligence.

The recent bomb blast in Quetta shows that the TTP might have launched a fresh offensive against the Chinese in Balochistan. This is really bad news for Beijing, as it again endangers the CCP.

Read More: The desperate move of a losing Gambler: China wants ASEAN to save Pakistan so that China could save its CPEC investments

China has put too much money into the CPEC, and now it wants to salvage its investments. In fact, China is ready to throw in more money just to protect the CPEC. As per recent reports, China could even be looking to send boots on the ground in Afghanistan so as to avoid any serious growth in terror activity in the region upon the US withdrawal from the war-torn nation.

China will, of course, be sending in troops only in order to protect its own investments in the nearby regions like Balochistan and not to help Afghanistan. But the sheer desperation shows how China realises that the CPEC is running into danger of a near-collapse with the multiplicity of security threats.

China’s vaccination plan is running very efficiently. It just leaves the small cities out of it