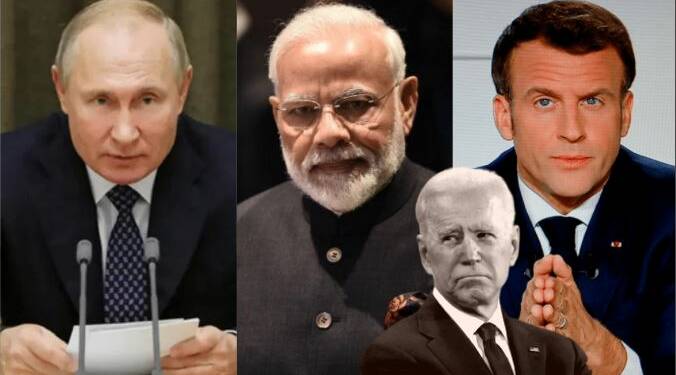 Shannon l. Alder has very rightly said that a best friend is the only one that walks into your life when the world has walked out. And India is witnessing a similar scenario at a time when it is worst hit by the Covid pandemic, and the same countries are showing up which had supported India in the post-Nuclear Test scenario. As Joe Biden ruined the hard work of his predecessor Donald Trump and looked the other way when its fellow Quad country was in distress, France and Russia have come to the support of India in the most overt instantaneously.

While French President Emmanuel Macron on Friday said France is ready to provide its support to the country to deal with the situation, Russia has offered to provide India medical-grade oxygen as well as anti-viral drug Remdesivir and imports are likely to begin in the next 15 days. And as these two long standing friends of India have shown their sincerity, the Biden administration has turned a blind eye to the problems of India, a country which it has time and again called a good friend and a partner for the 21st century.

“Russia has offered to supply 300,000-400,000 Remdesivir injections per week and the numbers can go up. Also, oxygen supply will start via ship soon,” The Economic Times reported an official as saying. “Russia has said it can begin Remdesivir supplies in the next 15 days,” a second official said. While the French President Emmanuel Macron said, ‘I want to send a message of solidarity to the Indian people, facing a resurgence of COVID-19 cases. France is with you in this struggle, which spares no-one. We stand ready to provide our support.’ His message was posted on Twitter by French Ambassador to India Emmanuel Lenain.

In 1998, India invited then French President Jacques Chirac, visited India as the chief guest on Republic Day. He stood by the Indian administration as India conducted the “Pokhran II” nuclear tests. This immense support from Chirac, especially when the US and others were contemplating the imposition of economic sanctions on India, proved to be a turning point in India-France relations that are going strong even today. And similarly, the constant symbiotic support relation between India and Russia has been a highlight of how countries can remain friends in thick and thin.

Read more: France always stood with India, be it on Pokhran or Kashmir. Today, India is standing strong by its side

While these countries are proving the definition of best friends, the USA under Joe Biden has taken a stand very unbecoming of an administration which claims to be a friend of India. The United States is committed to inoculating Americans “first and foremost”, the Biden administration has said defending restrictions on the export of raw materials for Covid-19 vaccines that could potentially slow down production of vaccines in India at a time when it is witnessing a deadly second wave. This is not it; the USA also has a stock of AstraZeneca vaccine which is not being used in the USA, but it is still unwilling to share it with its friends and allies.

Joe Biden is undoing all the goodwill that his predecessor Donald Trump had earned for the USA in India, which will turn out to be a loss for the USA in the long run. As Biden looks the other the other way, Putin and Macron show him what it means to be a true ally.